12:00
“Tracker placed?. Check. Virus? Check. We got everythin' we need to pull up on that army convoy and swipe them printing plates. Time to go commando or whatever the hell they be sayin' - I dunno that bootcamp shit.”
— Contract description

The player is instructed to go to the location of the military convoy, which starts moving from the western entrance road of Fort Zancudo and will drive through Great Ocean Highway, Senora Freeway and Palomino Freeway. The target is the same MOC seen in the previous planning work, being pulled by a Hauler Custom and escorted by two Squaddies full of Military personnel, as well as a Valkyrie MOD.0 with both turrets occupied. Once the player attacks the convoy, the escorting units will attack the player, while the truck drives at a higher speed to run away. When the trailer is significantly damaged, the rear ramp opens and a Barrage with both turrets occupied will attempt to take the player out, while more soldiers will chase them in Mesas. If the player somehow fails to intercept the truck, it will eventually drive to the road entrance of the NOOSE Headquarters and deploy the Barrage (if the truck was not damaged enough). There will be more soldiers on the area that will attack the player on sight.

Once the truck stops either because of damage or after reaching the destination, the player can enter the trailer and use the device with the virus to disable the on-board security system. There will be two soldiers inside that the player must take out, before stealing all four printing plates stored inside four boxes.

After stealing the plates and exiting the trailer, the player has to drive to the drop-off while evading more soldiers on the road, which will chase them down in Mesas and Crusaders, as well as a Maverick and another Valkyrie. They will eventually stop chasing the player once they are within the city, allowing the safe delivery of the plates to the client, completing the mission.

Fitting sticky bombs on the MOC.

Military personnel firing at the player.

Making use of the virus software to disable security.

Taking out the two military personnel onboard the MOC.

Close-up of a bank plate.

Being pursued by the military. 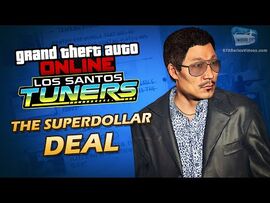