Salvatore Leone: "We cleaned it up with the Forellis. The Sindaccos we sent into the fucking sea. Now, I got the Sicilians on the phone, wanting peace. We all want peace! But my peace, not their fucking peace. I'm the big man now. No chump from the old country is gonna tell me what to do. I told them to go fuck themselves."
Toni Cipriani: "You did? Was that wise?"
Salvatore Leone: "Hey, I'm the boss now. ME! Now let's go see the mayor about getting my charges dropped..."
—Salvatore Leone and Toni Cipriani about the pay a visit to Mayor Miles O'Donovan.

Toni goes to Salvatore's home and finds him talking to the Sicilian Mafia, who want to make peace. Salvatore also wants peace but only on his own terms. He decides to pay Mayor Miles O'Donovan a visit, to talk about dropping the charges on him and quickly realizes the Sicilians are after the Mayor. Toni and Salvatore arrive at City Hall in Torrington, but are too late. Toni kills some Sicilian goons while Salvatore checks the Mayor's office, only to realize the Sicilians have already taken him.

They head to a jetty in Newport and see Massimo Torini speed off in a boat, with O'Donovan hostage. Toni and Salvatore take a boat and give chase. Toni gets a minigun and destroys the boats and helicopter chasing them. They eventually reach Portland Rock, with the Sicilians taking the Mayor to the lighthouse. Toni and Salvatore shoot their way up Portland Rock and meet Massimo Torini, who holds O'Donovan at gunpoint. Torini explains what the Sicilians did to the city was nothing personal towards Salvatore, but he's having none of it. Torini escapes to a helicopter with Toni eventually destroying it, thus killing Torini in the process.

Toni and Salvatore return to Salvatore's home with the Mayor, who then realizes that he is going to be controlled by the Leones. They then head up to Momma's Restaurante, meeting Salvatore's uncle, and peace is confirmed between the Sicilians and the Leone Family.

Salvatore thanks Toni for his work, but is going to reward him with only a half of the million dollars he promised, because he can't put a price on the friendship they have.

The reward for completing this mission is $500,000 and the King Jumpsuit outfit is unlocked.

Salvatore praises them for dealing with the Forellis, the Sindaccos, and now the Sicilian Mafia wants to make peace.

Salvatore wants the peace to be according to his terms, and not theirs.

"I told them to go fuck themselves."

Toni is not sure that it was wise to disrespect them like that.

Salvatore seems to be very confident that he is in charge of the city now.

Salvatore wants to pay the mayor a visit in order to get his felony charges dropped.

Head over to City Hall. Watch out for any Sicilian wise guys!

Salvatore now assumes that the Sicilians are going to kidnap the mayor.

Toni and Sal must get to him before the Sicilians.

Toni and Sal jump over the unfinished Callahan Bridge on their way to city hall on Staunton Island.

The Sicilians already got to city hall before them.

Take out those Sicilian mobsters!

"Lousy bastards have taken him already!"

Head for the Pier.

Toni and Sal arrive at the docks in Newport.

The mayor is seen sitting in a Speeder with Massimo Torini.

The Speeders are escaping.

Take out that Sicilian wise guy!

Toni and Sal get into a Speeder.

Sal will be driving after the mayor while Toni will be shooting using a Minigun.

Toni shooting down the chasing Speeders.

There is one shooter and one driver on each enemy Speeder.

A Maverick with each shooter on every side needs to be destroyed.

As Toni and Sal arrive at Portland Beach area, a lot of enemy Speeders spawn.

Massimo and the mayor arrive at Portland Rock.

Two enemies are shooting at the Speeder that Toni and Sal try to dock at the lighthouse.

"How many bastards are on this rock?"

"Shoot one bastard, and another one bites you on the ass!"

Toni and Sal at the base of Portland Rock.

This enemy in particular tries to hide behind some crates.

Upon reaching the lighthouse, Massimo is seen to be holding the mayor as a hostage at gunpoint.

"The mayor is mine!"

"THIS CITY is mine!"

"It was nothing personal."

Most of Salvatore's problem came from Massimo's actions.

Massimo hops on a Maverick while his Sicilian bodyguards protect him.

Massimo and his bodyguards die as a result of the helicopter's explosion.

Salvatore, Toni, and the mayor are at Salvatore's office, expecting the mayor to be under their thumb.

The mayor says "Thanks"; doesn't try to give in, or he is senile and doesn't know who he is dealing with.

The mayor is still not cooperating.

Salvatore is making it clear.

Salvatore is having some more problems for Toni to deal with.

Uncle Leone – The head of the Sicilian Mafia.

Salvatore and Toni meet with the uncle.

"...all we really wanted was clarity."

Declaring "peace" between the Sicilian Mafia and Leone Crime Family.

Salvatore wouldn't trust the uncle – The uncle heard him say that.

Toni did a lot for Salvatore and his crime operations.

Salvatore wants to give Toni $0.5 Mill. Although he promised Toni $2 Mills.

Salvatore corrects Toni that he said 1, not 2.

"You can put a price on friendship?" 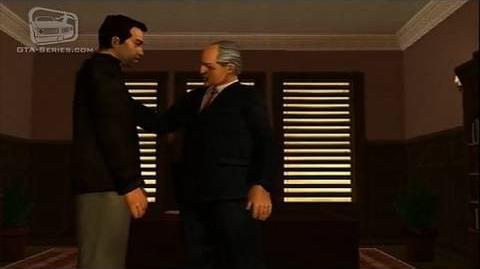 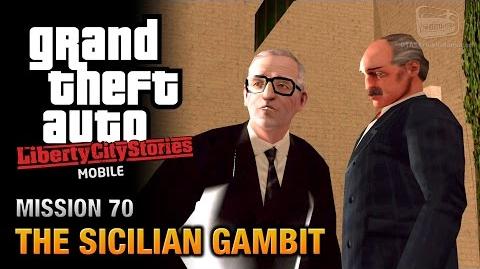