Salvatore is going to court and he knows that the Sicilian Mafia won't want him to get there, believing he will be released. Toni follows the Securicar that Salvatore is being transported in, protecting him from attacks by the Sicilian Mafia. When he arrives at the courthouse in Belleville Park, Salvatore is found not guilty and released. Salvatore leaves, heading to his home in Saint Mark's and tells Toni to meet him there.

The reward for completing this mission is $4,000 and the final storyline mission, The Sicilian Gambit, is unlocked. 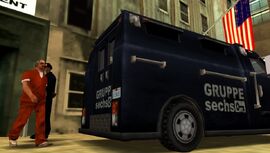 Salvatore enthusiastically informs Toni that he's getting out of jail.

Salvatore is worried that the Sicilian Mafia doesn't want him to make it to court alive.

Salvatore is also worried that they could take control of Liberty City while he's in jail, unable to manage his family.

Toni assures Sal that he's not going to let them take over.

Sal seems to not be convinced by Toni's confident claims, and orders him to make sure he gets to court alive.

Sal tells Toni that the guards are coming and to meet him at the front of the police station.

Go get a police car!

Get into position at the station.

Toni is in position, waiting for Salvatore Leone to come out of prison and enter the Securicar.

Salvatore comes out and gets into the back of the Securicar.

Escort the convoy to its destination.

The Sicilian Mafia members are blocking the road and one of them is holding an RPG.

The Sicilian soldier successfully hits a police car with his rocket launcher.

Protect the transport van and make sure it arrives in one piece!

The Sicilians have set up more roadblocks.

Take out the blockade! (1/4 blockade)

After breaking through the roadblock, the Sicilians' Stingers chase the Securicar, trying to cause as much damage as they can.

Don't get too far from the transport van!

Take out the blockade! (2/4 blockade)

Don't get too far from the transport van!

You're going to lose the transport van! (3/4 blockade)

Successfully blowing up the 3rd blockade.

Salvatore safely arrives at the courthouse.

Salvatore is a free man.

Sal tells Toni that he needs to get out of his jail outfit and to meet him at his house. 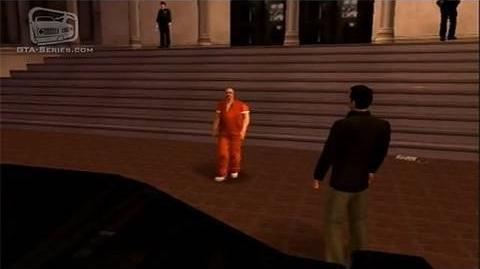 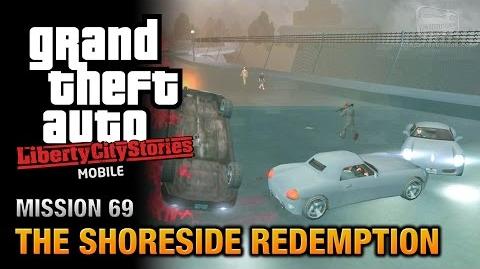