Franklin Clinton describes him as a former businessman who informed the police on his "boardroom buddies" who had been taking money from the business for their own benefit.

He always wears the same white collar shirt with a brown suit vest.

“Alright, look, we both know some shit about being in the wrong place at the wrong time, and so does today's client. He's supposed to be in witness protection after he busted his boardroom buddies with they hands in everybody else's cookie jar... but I guess somebody talked. His convoy just got ambushed somewhere near the La Puerta scrapyard. Rescue his ass and we get fuckin' paid.”
— Franklin's description

The protected person's convoy is ambushed by The Professionals in the Rogers Salvage & Scrap scrapyard.

F. Clinton and Partner is contacted, so Franklin sends the player to save him and take him back to the safehouse. His vehicle is seen in the HVY car crusher, with his dead bodyguards and The Professionals' Fugitive and Granger nearby. 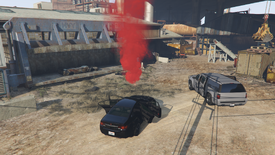 His wrecked car in the crusher. 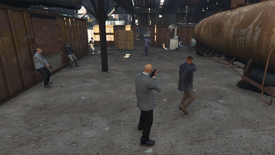 Under attack in a large shed.