In-game time
“Ok our man's on the inside and your ramp is all set up. Now you got a date with Lil' Dee and them targets in Bolingbroke Penitentiary. Get in, clip 'em, and get Dee's fat ass outta there. We 'bout to hit them rats wit a lil pied piper shit.”
— Contract description

The player is instructed to head over to the stunt ramp stashed near the Bolingbroke Penitentiary and use the ramp in order to jump over the perimeter fences and into the prison. The player will instantly gain a four-star wanted level and be shot at by prison guards once they have landed in the prison.

Upon landing, the player will have to make a 180 degree turn and drive in the direction of the water tower until they see either the water tower or a trash container which can be maneuvered through to access the central area of the prison. Once inside the central area, the player can start driving over to the locations of the targets, marked with red skulls on the radar, and take them out. Caution should be taken while navigating the prison as there will be prison guards shooting at the player on every corner.

Preparing to use the stunt ramp to jump over the fence.

Jumping over the fence into the prison.

Taking out the first set of targets.

Taking out the second set of targets.

Taking out the prison bus driver.

Meeting Sessanta at the drop-off. 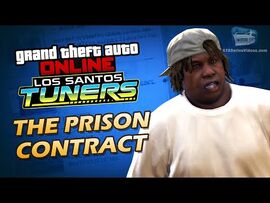