"Break Rashkovsky out of Bolingbroke. Ground team takes the transport bus, poses as guard and inmate, and goes into the prison to get him out. Demolitions takes care of the inbound transport bus. Pilot collects then in the plane."
— Instructions

The Prison Break is the final part of Prison Break, the second Heist available in Grand Theft Auto Online; added in The Heist Update.

Agent 14 calls in that the schedule has been "brought forward", stating that the death of Rashkovsky's partners had caused attention and a price has been put on his head. During the mission each member of the crew will assume a different role. The officer and prisoner will both get into the prison using the stolen prison bus; a pilot and the demolition will both provide support to the ground crew in their respective roles. All players except the Prisoner (Prisoner will only get an AP Pistol) will be equipped with an AP Pistol and Special Carbine and the demolitions team will also have a Jerry Can and Sticky Bombs.

The demolition needs to intercept the Prison Bus before he reaches Bolingbroke, while the pilot needs to go to Los Santos International collect the Velum.

Both the officer and the prisoner need to collect the Prison Bus left in the junkyard near Sandy Shores.

The prison bus will be near Great Chaparral and is unguarded, kill the driver and take the bus to Sandy Shores Airfield following the GPS route to avoid alerting the authorities. Once at the airfield, destroy the bus using any means available (Molotov Cocktails are provided). Go to the new location on the map at the western end of the airfield to steal a Buzzard, which is being guarded by one or two Merryweather guards. The instructions say to protect the Velum, so take out the pursuing Lazer then the player can go to the prison to give aerial support to the Officer and Prisoner once the N.O.O.S.E team has been called.

Now work with the officer and prisoner to kill all the N.O.O.S.E members so they can make their way out of the prison with Rashkovsky. Once the area has been cleared the pilot is informed that he can land the Velum at Sandy Shores Airfield. Protect the officer, prisoner and Rashkovsky so they can reach the Velum. Once they have lost the cops, and the crew has parachuted from the Velum, regroup with them in a beach in Palomino Highlands to collect them with the Buzzard and then fly the team back into the city.

After both have entered the bus, go to Bolingbroke Penitentiary to get access to the prison. The officer will be the one driving, so be careful to not attract police attention.

After entering the prison, both players need to make their way to Rashkovsky. Both players immediately take out the four officers that are near them (if they decide to continue walking along, a guard with a shotgun will open fire on them even if they are doing nothing wrong). Now both players will need to fight their way through the prison. Follow where the yellow marker tells you to go and it will lead you to Rashkovsky. Rashkovsky is in a lock down so there is just one way to reach him. The Prisoner must then go to him, while the Officer sticks behind to give support as the N.O.O.S.E reinforcements come. Remember to not trigger the cutscene where the player gives the gun to Rashkovsky before the Demolition member is ready to give support from the sky with the Buzzard.

Now work with the Demolition to kill all the N.O.O.S.E members and get out of the prison with Rashkovsky. Near the prison entrance, there will be a Police Riot van ready for them to drive. Get in with Rashkovsky and proceed to the airfield. Now there will be cops spawning on the airfield so have the Demolition clear them out. Once the area has been cleaned inform the pilot that he can land the Velum. Wait for the pilot to land the Velum on the airfield and get in the plane. The pilot must now lose his wanted level. After losing the cops and jumping out of the plane, regroup with the Demolition and enter his Buzzard.

The pilot, after collecting the Velum, must take it to Sandy Shores Airfield, but instead of doing this, keep flying around Los Santos and avoid flying into Los Santos County to avoid being chased by P-996 Lazers. Wait until the land team have broke Rashkovsky out of the prison and land on Sandy Shores Airfield to collect the Officer, Prisoner and Rashkovsky. Now fly across the map to lose the wanted level and after this, fly in the indicated area to jump out of the plane and land in a beach in Palomino Highlands. Regroup with the Demolition and enter his Buzzard.

Once all members of the team are in the Buzzard, return to the city and the heist is complete.

Two members of the crew posing as a guard and prisoner with the Prison Bus in the background. 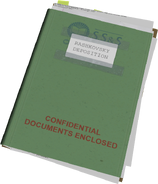 Raskovsky's Deposition.
Add a photo to this gallery

Retrieved from "https://gta.fandom.com/wiki/The_Prison_Break?oldid=784957"
Community content is available under CC-BY-SA unless otherwise noted.