Vincenzo Cilli: "Listen, I'm down at the Portland docks. We got a big shipment just come in. Get yourself down here. I'm onboard the big freighter."
Toni Cipriani: "I don't know Vinnie... I got stuff to do."
Vincenzo Cilli: "Look, I know I've been an asshole to you Toni. And for that, I'm truly sorry. But, from now on we'll be like partners.. okay. Better than partners... brothers."
—Vincenzo Cilli calls Toni Cipriani asking for help with a "big shipment".

"The Portland Chainsaw Masquerade" is a mission in Grand Theft Auto: Liberty City Stories. It is the final mission given to protagonist Toni Cipriani by Vincenzo Cilli from his warehouse in the Atlantic Quays district of Portland, Liberty City.

Toni drops by Vincenzo's warehouse in Atlantic Quays, having received a phone call after witnessing JD's murder. However, Vincenzo is on a ship down at the Atlantic Quays docks, asking that he help with a "big shipment". Toni, at first reluctant, agrees to drop by for Salvatore, but not before threatening to kill Vincenzo if he pulls a trick on him again.

Toni reaches the hull of the ship, however, he is ambushed by a number of Vincenzo's henchmen wielding chainsaws. Toni manages to kill all the attackers, after which Vincenzo enters to check if Toni is dead. When he finds Toni still alive, Vincenzo expresses his anger at Toni for quickly becoming Salvatore's right hand man after returning. Armed with a Micro-SMG, he begins shooting at Toni, who fires back and shoots him in the head, killing him and finally getting his revenge for betraying him earlier. Toni leaves the ship, completing the mission.

The reward for completing the mission is $3,000, unlocks the Overalls Outfit and unlocks the mission "Sindacco Sabotage" for Salvatore Leone, as well as the SlashTV side mission.

Salvatore Leone: Toni? It's Salvatore. We got big trouble! Get your ass over here pronto!

Meet Vincenzo at the Freighter.

Head down to the hull.

Toni attacking the men tasked with killing him.

Vincenzo comes out with an Uzi after all his men have been killed.

Vincenzo is irritated that Toni is not dead.

Vincenzo is ranting that Salvatore Leone respects Toni more than him and that this town will belong to him and not Toni.

Toni checks that Vincenzo is dead.

Head for the exit. 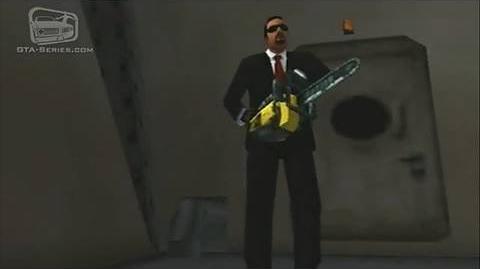 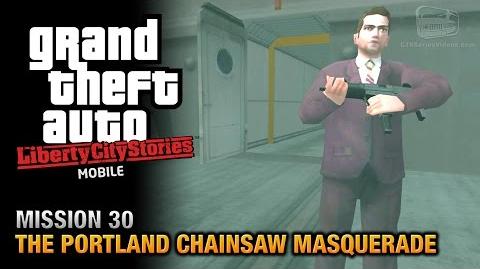