Wikipedia has an article on:
Music of Grand Theft Auto V
Wikipedia

The album was released on 24 September 2013. The Score (Volume 2) was recorded in the Vox Recording Studios in Los Angeles, California, featuring Tangerine Dream, Woody Jackson, Oh No, The Alchemist and DJ Shadow. The Album was released in three Volumes, including an original score composed for the game in addition to selections from songs that were licensed for the in-game radio. The retail version of the soundtrack was released on 9 December 2014 for CD and vinyl through Mass Appeal Records.

The full soundtrack is 216 minutes long. The album is available on iTunes

Volume 1 features Original Music which was recorded for the release of the game by a number of artists both working for Rockstar Games and not. This includes tracks featured on the in-game radio and tracks appearing in various Grand Theft Auto V Trailers. It also includes the original release of Welcome to Los Santos, the game's main theme.

Volume 2 features many songs from the original Grand Theft Auto V Official Score. These songs were composed by various artists working for Rockstar Games under contract, including Tangerine Dream, Woody Jackson, Oh No, The Alchemist and DJ Shadow. These songs do not appear on the in-game radio station but may appear, albeit slightly differently in length or intensity, during certain in-game Missions or during Wanted Levels of more than 3 stars. Many of these songs also appear on the Cinematographic Score, an album released by Tangerine Dream themselves.

Many tracks on Volume 2: The Score have different names than those that appear in-game, in the Rockstar Editor score list, or on the Cinematographic Score album.

Volume 3 has a selection of "the biggest and most ambitious" tracks that appear on the in-game radio stations. 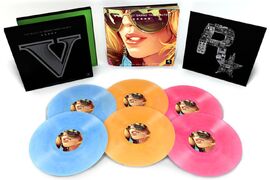 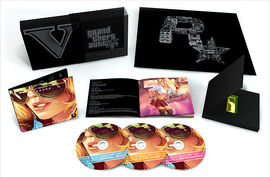 CD edition (three CDs).
Add a photo to this gallery

Retrieved from "https://gta.fandom.com/wiki/The_Music_of_Grand_Theft_Auto_V?oldid=1184619"
Community content is available under CC-BY-SA unless otherwise noted.