The Master and the Molotov

The Master and The Molotov

Wasted
Busted
Faustin gets away

In-game time
“Dimitri turned on me, not the other way around. America made him greedy. Dimitri will turn on you as well, you shall discover this.”
— Mikhail Faustin

The Master and the Molotov is the first mission in Grand Theft Auto IV given to protagonist Niko Bellic by Dimitri Rascalov from the Hove Beach district of Broker, Liberty City. This mission introduces the fire escape stairs and Body Armor to the player.

The Petrovic Family are threatening to kill Dimitri if his leader, Mikhail Faustin is not killed soon. Niko is sent by Dimitri to kill Faustin because Faustin's recklessness is getting out of control. Kenny Petrovic also wants revenge on Mikhail for ordering the killing of his son Lenny and destroying his garage in Bohan. Dimitri explains that he was able to negotiate with Petrovic so that only Faustin would be killed. Dimitri tells Petrovic that Niko was just a hired gun, and Petrovic is willing to spare Niko on the condition that Niko kills Faustin himself.

Niko heads over to Perestroika (if the player has no armor, Dimitri texts Niko and explains that he has left some at the side of the club, the armor will be marked by a blue dot at the east side of the club). Niko confronts Faustin, who sends some of his goons to kill him whilst he escapes. Once Niko kills all the thugs, a cutscene will show Faustin escaping to the back of the club. Niko follows him, taking out any goons in his path, and then climb the stairs at the end of the alleyway to confront Faustin, who will be waiting for Niko at the roof of the club.

On the roof, Faustin warns Niko that Dimitri will betray him, as America has made him "greedy". Niko ignores this and executes Faustin, who falls off the roof to his death.

After Faustin's death, Niko phones Dimitri to inform him. Dimitri tells Niko he did the right thing and that he will talk to Kenny Petrovic.

There is no reward for completing this mission, but the mission Russian Revolution is unlocked (providing the missions Concrete Jungle and Shadow have been completed) following Dimitri's phone call to Niko.

"Police reports are telling us there's been a violent shootout at a nightclub in Hove Beach. Mike Whitley at the scene.

Mike Whitley: "That's right, i'm inside the Perestroika nightclub, scene of a bloodbath. We've got several people who may be dead and blood everywhere...it's just horrific. One of the dead is thought to be the club's owner, Mikhail Faustin. It's the latest in a string of violent crimes in the Hove Beach area and police are mystified as to what has caused them."

"A nightclub owner is dead and the beachside communities of east Broker are in panic after another violent shootout last night. Patrons at the Russian-themed Perestroika night club and cabaret were horrified when an argument between the owner and a man he appeared to know ended in murder. The owner, Mikhail Faustin, 45, was killed along with several accomplices whose names have not yet been released by police. The assailant escaped. Eye witnesses described a dark-haired European man in his late twenties or early 30s of average height and build, which does not narrow it down that much."

"The mostly Russian community of Hove Beach is in shock. Mr. Faustin was a well known local figure, a colorful man who ran one of the best dinner clubs in the area. A lover of life, he leaves a wife and daughter." 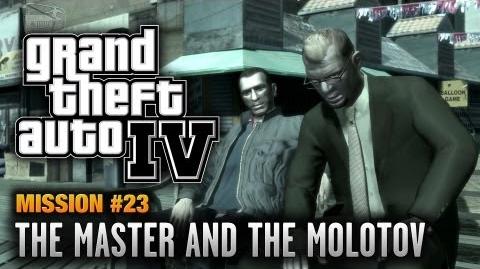 Niko and Dimitri talking about Faustin.

Niko making his way up to the club roof

Faustin falls off the roof of his club.