View source
watch 02:59
Wiki Targeted (Games)
Do you like this video?
Play Sound
You may be looking for The East Vinewood Clubhouse in GTA V.

The Lost MC Clubhouse as it appears in The Lost and Damned.

Situated in a building on Berners Road in Acter, Alderney, the clubhouse, which bears The Lost's colors and name, is intended to serve as a base of operation and a place of socialization among members of the gang. There is also a building right next to the Clubhouse that bears The Lost's logos, appearing to be a bar (judging by the various beer brands logos on the walls), but it is inaccessible.

The clubhouse appears in GTA IV but is inaccessible. In TLAD, however, the club's interactivity is significantly expanded and is more detailed as the DLC centers around Johnny Klebitz and The Lost's activities. Accessible after the mission "Clean and Serene", the club is depicted to have four floors (the upper two have no practical use except as a path to the roof), as well as entrances at the side and at the front of the clubhouse, and a parking space primarily intended for bikes is added outside, which Johnny may use to store vehicles.

The interior of the clubhouse as depicted in TLAD is as follows:

In addition, Liberty City Hardcore can be heard playing throughout the interior of the clubhouse.

By the completion of "Get Lost", The Lost has suffered from extensive in-fighting and conflict from Ray Boccino to the point the clubhouse itself is trashed. Upon learning of the club's condition during the final cutscene of "Get Lost", Johnny Klebitz and other surviving members of The Lost Brotherhood agree to burn the club down and "put it out of its misery". The clubhouse, presumed to be gutted in the fire, will no longer be accessible after.

The exterior of the building in a pre-release TLAD screenshot.

A pre-release screenshot of TLAD.

The interior of the clubhouse, depicting a meeting area.

The store room (first floor), where the player saves their game.

The "office" (first floor), where the television and computer are located.

The Lost's memorial at the outer portion of the recreation room. 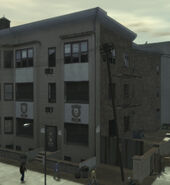 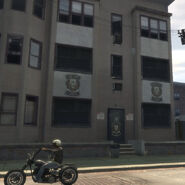 Although it is inaccessible after "Get Lost", people have found a glitch to allow access to the clubhouse again by exploiting the TV feature. To do so, access the roof, by ascending the fire escape, walk around until there is a pop up on screen to watch television[1]. watch the television as usual and then stop watching television, this will allow the player to access the clubhouse again, although they cannot leave the clubhouse unless the character dies or the player loads a previous save game.

Players can still watch television and play pool, but hi-lo card games and arm wrestling are not available. If the player walks around the front entrance near the bar where there's usually a bunch of people, it's empty, but Johnny still does the pushing animation and says stuff even though no one's actually there, if playing the game on a PC there will be members at the Clubhouse, Internet access still works, as does the QUB3D arcade game on the second floor. Saving in the bed doesn't work. The player must basically walk straight ahead from the top of the staircase they used to get up there.

Enter the clubhouse in The Ballad of Gay Tony

There is also a glitch for entering the clubhouse in The Ballad of Gay Tony, by spawning an Akuma bike and get half of it inside the door enough for it to glitch inside. If the glitch is exploited the player can play QUB3D, but the television will be unusable. If the player manages to enter the clubhouse and play pool, they will play against a member of the Angels of Death. The only photo on the memorial wall is that of Lil' Joe, the first member whose photo was hung up on the wall. To get out of the clubhouse, replay a mission, die or load the game. 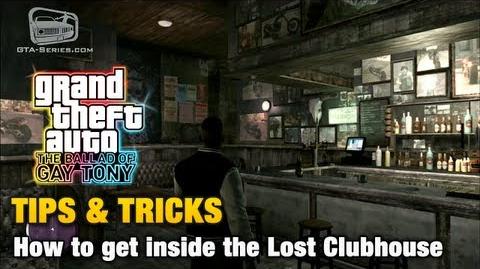 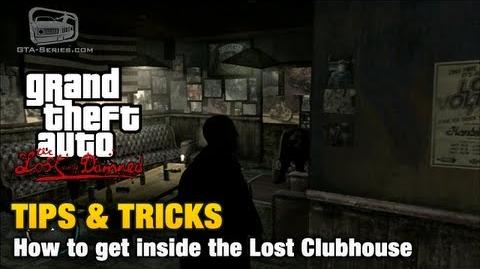