GTA Wiki
Register
Don't have an account?
Sign In
Advertisement
in: Gangs, Gangs in GTA IV, Gangs in The Lost and Damned,
and 6 more
English

The Lost Motorcycle Club is an outlaw motorcycle club in the HD Universe of the Grand Theft Auto series operating primarily out of Acter, Alderney State in 2008, but later nationally (including Los Santos and Blaine County, San Andreas) in 2013 and onward. As of 2021, they are active on both the east and west coasts, as well as the Midwest. The vice president (later president) of the Alderney chapter, Johnny Klebitz, is the protagonist in The Lost and Damned and a minor character in both Grand Theft Auto IV and Grand Theft Auto V.

According to The Lost website, The Lost began in 1964 with eight U.S. Marines who met during the Vietnam War in Hanoi, North Vietnam. After the war ended, they had a continued thirst for drugs and violence. Because of this, they started the club and named it 'The Lost' in honour of all their friends who had been killed in the war.

At the beginning of The Lost and Damned, the protagonist, Johnny Klebitz, is the acting president in the absence of Billy Grey, who had been incarcerated for drug charges. The clubhouse is located in Acter, but neighbouring Berchem is also considered Lost MC turf. Prominent members of the Liberty chapter included the chapter's president Billy Grey, vice president Johnny Klebitz, treasurer Jim Fitzgerald, secretary Brian Jeremy, road captain Clay Simons, and sergeant-at-arms Terry Thorpe. Other noteworthy members were Jason Michaels and Angus Martin, as well as old ladies Leila Sharpe and Ashley Butler.

The Lost MC also has a presence in Broker, Liberty City, although they are apparently subordinate to the Liberty chapter leadership in Acter.

In 2008, Jason was attacked and killed by hired gun, Niko Bellic, for dating Mikhail Faustin's daughter. When Billy was released, he told the club members that Jason had actually been killed by a rival motorcycle club, the Angels of Death, beginning a war between the two gangs. The Lost manage to steal a large amount of heroin from the Angels of Death and attempt to sell it, only for Billy to be arrested again.

Johnny once again becomes the Lost's de facto president, which causes the Liberty chapter to split into two different factions, beginning The Lost Civil War. One of the factions, lead by Brian, believed that the other faction, lead by Johnny, had sold Billy out. Eventually, Johnny's faction wipes out all of Brian's. Johnny begins working for the Pegorino Crime Family and steals expensive diamonds from Gay Tony for them. He tries to sell them to the Jewish Mob but is ambushed at the deal by Tony's partner, Luis Fernando Lopez, who takes back the diamonds, though Johnny manages to take the money before leaving. He keeps the money for himself, causing one of the Pegorino Crime Family members, Ray Boccino, to kidnap Jim. Johnny saves him, though Jim is later killed by one of Ray's men. When Johnny and the remaining Lost members learn that Billy plans to testify against them, they storm the prison where Billy was being held and kill him. Afterwards, they find their clubhouse trashed, so they burn it down to put it out of its misery. The only surviving members of original Lost club still affiliated with them are Johnny, Clay, Terry, Angus, and Ashley.

The Liberty chapter manages to somewhat rebuild itself by 2009. Huang Lee is contacted by Lester Leroc, a private investigator hired by the Triads leader Hsin Jaoming. Hsin hires Lester to go undercover in the Angels of Death in order to find a traitor among the Triad's ranks. As Lester doesn't know how to ride a motorcycle, he asks Huang to pretend to be him and pass the AOD's initiation test. As part of the test, Huang kills many of The Lost MC members hanging around Angels of Death turf at Meadows Park in Dukes.

By 2013, some members of the Liberty chapter moved west towards the rural lands of Blaine County; these members included Johnny, Clay, Terry, and Ashley. They create a new chapter and manage to establish a club hideout in Stab City, known as The Range and acquire a safehouse/front in Grapeseed along with an airstrip that they use to smuggle supplies and weapons all throughout the state.

Another chapter happens to be active in the city of Los Santos as well, mostly seen around the East Vinewood area, where they patrol in their Gang Burritos and operate a clubhouse. Some members can be seen further south in the city, all the way down to East Los Santos, as indicated by a random event. Some Gang Attacks also show that The Lost are in other parts of the city, as well. It is possible that the Los Santos chapter may have been formed in 2004 when Johnny and several key members visited the city. This is supported by the kidnapped girl in the Random Event - Snatched who states that she has been with the chapter for nearly ten years.

The Lost's presence grew throughout Blaine County with Johnny as president; however, drug use became an issue within the club. Johnny became addicted to methamphetamine and Ashley, Johnny's girlfriend, also continued her addiction, supplementing payment to her dealers, such as Trevor Philips, with sex, much to Johnny's grievance. Because of Johnny's addiction and depression over Ashley, his popularity in the club began to falter as he weakened as a leader; to the point where Billy Grey was becoming a martyr to several members of the club.

The Lost's primary businesses in Blaine County became the illegal distribution of firearms and drugs, causing tension between them and Trevor's business, Trevor Philips Enterprises. Trevor and his associate, Ron Jakowski, later instruct the GTA Online Protagonist to steal drugs from the Lost. Additionally, the Lost make enemies with the Madrazo Cartel and The Families, who also hire the Online Protagonist to disrupt their business.

To enact revenge, the surviving members of The Lost ransack Trevor's Trailer. Trevor's response is to kill all the Lost members at the Sandy Shores Airfield and take it for himself. Later on, a new chapter moves into Stab City, promising to find the one who killed all their old members. Before they have the chance to, however, Trevor sneaks into their hideout and blows up many of their trailers, before killing the new members there.

Afterwards, The Lost still maintain a presence throughout Los Santos and Blaine County, though significantly weakened. If they run into Trevor, they will attack him on sight. After completion of the main storyline, The Lost MC's Los Santos chapter can still be encountered in GTA V throughout southern San Andreas at:

By 2019, the Lost established a clubhouse in Paleto Bay. While buying meth in Sandy Shores, Tao Cheng is kidnapped by the Lost and held at the abandoned motel for three days. The GTA Online Protagonist is hired by Tao's translator and Tao's associate, Agatha Baker to rescue him. The Protagonist kills the Lost at the motel and rescues Tao, who is high on drugs and happy to see the player. Later on, to acquire weapons for a heist at the The Diamond Casino & Resort, the GTA Online Protagonist can attack the Paleto Bay clubhouse and steal two cases of unmarked weapons.

Later, in 2021, at the request of Trevor's associate, Chef, several meth labs owned by the Lost are destroyed by the GTA Online Protagonist.

These are all members of The Lost that will help Johnny in Gang Wars. They are all part of The Lost MC in 2008 and can be killed in the same year.

Before the events of The Lost and Damned

During the events of The Lost and Damned (2008)

During the events of Grand Theft Auto: Chinatown Wars (2009)

During the initial events of Grand Theft Auto Online (c. 2013)

During the events of Grand Theft Auto Online, from 2017 to the present day

Notorious outlaw motorcycle gang The Lost have taken up residence in the Alamo Sea and are now terrorizing the impoverished desert community. Steve Petoria is on the scene. For years, the Lost motorcycle gang were involved in a non-stop war with The Angels of Death, raging across several states. Then came 2008's bloody civil war, that seemed to wipe them out. Now it appears they are back, and worse than ever. The gang is believed to be heavily involved in illegal arms dealing and the manufacture and distribution of Crystal Methamphetamine.

Billy Grey: President of the Lost MC's Liberty chapter until 2008. 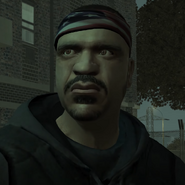 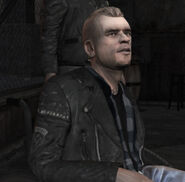 Symbol on the clubhouse's door.

Bar and band stage inside the Acter clubhouse.

Second floor of the Acter clubhouse.

Johnny and other Lost members

The Lost MC hanging outside the Ice Skating Museum in the mission Double Trouble.

The Lost MC ambushing an A.O.D. convoy in the mission Convoy Conflict.

The Lost hideout called The Range at Stab City.

The Lost MC members at Hookies in North Chumash.

The Lost MC seat decal on the Daemon.

The Lost MC members on their bikes.

One of The Lost MC's modified Daemons.

One of The Lost MC's modified Gang Burritos.

One of The Lost MC's modified Slamvans.

Sergeant at Arms at R L Hunter & Son in Grapeseed.

Sergeant at Arms on Senora Way

The Lost in the Underbelly of Paradise.

The Underbelly of Paradise.

A member with his dog. 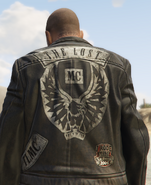 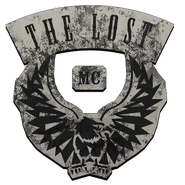 A worn patch, as seen on some Lost MC jackets.