12:00
“You got the truck and the meth lab locations, so we 'bout ready to get on it. Light up the lost fools labs, grab the product and don't let nobody stop you from gettin' that crank tank back. Cool?”
— Contract description

The mission starts with Sessanta instructing the player to destroy four of The Lost MC's meth labs before stealing their meth supply from Stab City and delivering it to Chef. Sessanta will send the player the locations of the meth labs. The player can destroy the labs in any order they like, however, it is recommended for players seeking to complete the contract efficiently to go to the labs in the following order:

After leaving the first meth lab, the player will need to get into their vehicle and advance to the next meth lab. Caution is advised when doing this as members of the Lost MC armed with Micro SMGs and Sawed-Off Shotguns will start to pursue the player on motorcycles from this point forward.

When the player arrives at Stab City, they will need to search the vicinity for a RON fuel tanker where the meth is set for transport. Care should be taken for this section, as the tanker will be heavily guarded by the Lost MC. A Lost Slamvan will be parked in front of the tanker, effectively blocking it. Making a clear path for the tanker will depend on whether the player acquired a Phantom Wedge or a standard semi-truck during Planning Work: Transport Method.

Fighting the Lost MC at the scrapyard.

Planting the bomb on the control panel.

Arriving at a foreclosed farm guarded by the Lost MC.

Getting into the Phantom Wedge.

Hooking up a fuel tanker to the Phantom Wedge. 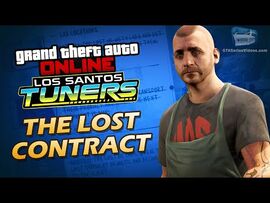