"This challenging short lap race puts your cornering skills to the test. Four sharp turns stand between you and the finish line."
―GTA Online Description

The Los Santos Triangle is a Rockstar Verified race featured in Grand Theft Auto Online. It is windy double-triangled circuit, and despite been called the triangle, it is in fact 2 triangles intercepting each other.

The clockwise course gets its name from the the three roads (Carcer Way, San Vitus Boulevard, and Dorset Drive) which form its straightaways, creating a triangle formation. The Carcer Way portion however is split in two by a right hand turn onto Abe Milton Parkway, making the course (as mentioned above) two triangles instead of one. The race's characterizing feature, a sharp left-handed hairpin turn, is located at the south end of the Parkway. The hairpin is barricaded by concrete barriers which prevent players from overrunning the turn and spilling over into the rest of the course. Often this has the side-effect of creating a logjam of cars in the turn, particularly on the opening lap of the race. The course has six turns overall (five right-handed and one left-handed), plus a Bus Stop chicane in the final straightaway on Dorset Drive.

Due to the short length of the course (at 0.83 miles), its low-speed turns, and the maximum of 16 players, the track in some respects races more like a Short Track than a conventional street circuit, with a good lap in the Sports and Super classes taking less than 40 seconds.

The course passes by several landmarks in Rockford Hills and Burton, including Rockford Plaza, Mount Zonah Medical Center, and the Augury Insurance building. 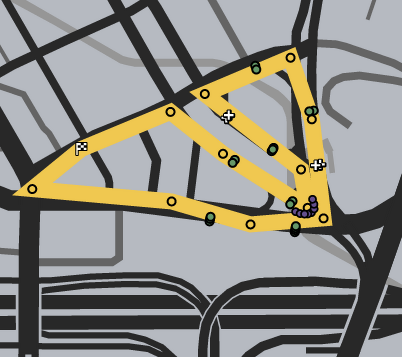 Retrieved from "https://gta.fandom.com/wiki/The_Los_Santos_Triangle?oldid=1151906"
Community content is available under CC-BY-SA unless otherwise noted.