The team runs out of lives.
The coke has been destroyed.

"I like to know what's happening in the city. Some call it micro-management. I call it staying ahead of trouble. Now, there are some new guys selling too-pure coke all over. I wanna know who they are, and I want them gone. Busting a deal in Rancho would be a good place to start."
— Description

The Los Santos Connection is a mission in Grand Theft Auto Online given to the player by Martin Madrazo. It is available for 1 to 6 players.

The team has to clear out several enemies and hack the vehicle's GPS marked on the map. This will take the team to El Burro Heights where a lot of enemies needs to be cleared from the depot. At least four cars come as backup for the enemies. After all the enemies are cleared, a laptop needs to be hacked in order to find the supplier of their drugs.

The team then heads to Los Santos Airport, whilst being chased by enemy cars, and needs to kill a lot of enemies in the hangar and steal the drugs. Two more enemies will be found upstairs where the drugs are. After obtaining the drugs, the team has to destroy the crew's vehicles, including several vans and two airplanes. More enemies will come in to kill the team. The team then needs to use the Buzzard outside the hangar to follow the supplier who flees in a jet. An enemy buzzard will come to attack the team. One of the players can call the Merryweather Security to help to clear out the rival's chopper. Just like before in El Burro Heights, once the player steals the coke, he needs to get quickly out of the hangar because the enemies spawns infinitely.

Once the supplier is dead, the team needs to go to Madrazo's house to complete the job. 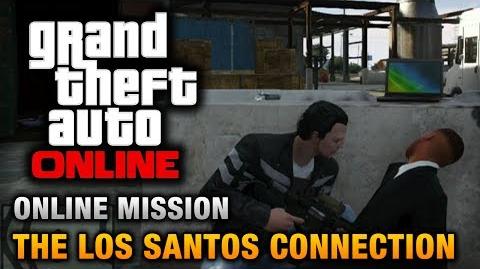 Retrieved from "https://gta.fandom.com/wiki/The_Los_Santos_Connection?oldid=634066"
Community content is available under CC-BY-SA unless otherwise noted.