• ­Buy a Pump Shotgun and a flashlight mod.

• ­Go to the meeting at the recycling plant.

• ­Go back to Franklin's house.

"Stretch has been released from prison, Lamar and Franklin take him out."
―GTA V description at Rockstar Games Social Club

Stretch: "You ain't got no motherfucking respect."
Franklin: "Motherfucker, I got respect for reality."
―Stretch arguing with Franklin.

The Long Stretch is a mission in Grand Theft Auto V, given to protagonist Franklin Clinton by Lamar Davis.

Franklin meets Lamar at his house, who reintroduces Stretch, who seems to have just been released from prison. Franklin doesn't seem too happy about his comeback, which starts an argument with each other, but Lamar reminds them of business.

Franklin, Lamar, and Stretch head over to Ammu-Nation and purchase a Pump Shotgun with a flashlight accessory, in case the deal goes wrong (If Franklin cannot afford it, then Lamar will loan him $1500). They then drive to a warehouse, where they meet up with D, whom Franklin and Lamar kidnapped earlier with some help from Chop.

What at first appears as a deal turns out to be an ambush by the Ballas; D betrays them and Stretch shoots him in the head twice, killing him instantly. Franklin, Lamar, and Stretch then fight their way out, killing many groups of Ballas members and starting a fire inside. Then they realize that the police are just outside and have a police helicopter hovering over them. Franklin takes out the helicopter, then the trio makes their way to a nearby road, where they steal a vehicle to get away from the police.

The trio then drives back to Franklin's house after losing the cops.

"Something went very wrong as a drug deal at a recycling plant in La Puerta descended in to a violent shootout, leaving several gang members dead and police confused as to what has caused these recent upsurge in extreme gang crime. The dead mostly seemed to be affiliated with the notorious Ballas gang. If this was an internecine struggle between different "sets" within the gang, or part of the Ballas eternal struggle with The Families, or a falling out with another of the city's many street gangs, is at this point unclear. The LSPD called for additional funding to look into the program and potentially restart some of their long since discredited anti-gang programs. Vinewood has applied for the movie rights to yesterday's events."

"A drug deal goes very wrong. Something went very wrong as a drug deal at a recycling plant in La Puerta turned into a violent shootout, leaving several gang members dead, and police confused as to what has caused this recent upsurge in extreme gang crime. The police have called for calm, and responded by flying a lot of helicopters over poor neighborhoods all night long in a show of community spirit."

Franklin's Aunt and her friends.

Driving to the meeting.

Ballas arriving at the factory.

Lamar getting hit by an exploding door.

Franklin taking out a police helicopter. 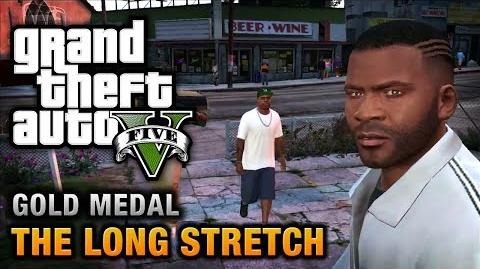 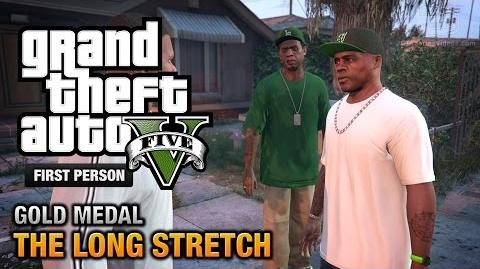 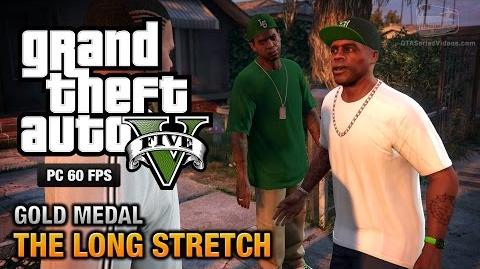 Retrieved from "https://gta.fandom.com/wiki/The_Long_Stretch?oldid=1298625"
Community content is available under CC-BY-SA unless otherwise noted.