The Loneliest Robot in Great Britain is a viewable film in Grand Theft Auto V produced by Fred's Pictures, a British movie company and directed by S. Louis Crawford.

A 10-minute animated fable set in a dystopian futuristic Great Britain, it features a rather light-hearted and family friendly look which is overshadowed by scenes of violence, profanity, homophobia, sexual content, and dark images. Despite this, it is rated PG for "Parental Guidance". It includes easter eggs and references of past Grand Theft Auto titles, such as the British spanking lover Freddy.

According to an Internet news article from WNKA International after the mission Crystal Maze, the movie was banned in the United Kingdom as it was considered pornographic.

The film was based on a movie adaptation of George Orwell's influential and controversial book Nineteen Eighty-Four which also takes place in a dystopian futuristic Great Britain. However, it contains several references to prying or overly-controlling authority figures, and attempts by government to increase surveillance.

The film also seems to be largely inspired by WALL-E, a Pixar science fiction film that at the beginning portrays a lonely robot in a largely dystopian future Earth.

On May 13th 2015, Rockstar Games announced a contest for GTA players to create a music video for the song "Leave" by the band Wavves using the Rockstar Editor. Any user who uploaded a video to the Social Club during the contest period (not just entries in the competition) would win an in-game T-Shirt bearing the logo of The Loneliest Robot in Great Britain[1]. This t-shirt was awarded after the contest ended on Monday 8th June. 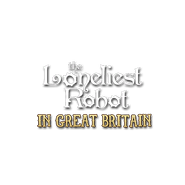 The Loneliest Robot 62, a framed animation cell at The Diamond Casino & Resort.

The Loneliest Robot 40, a framed animation cell at The Diamond Casino & Resort.

Retrieved from "https://gta.fandom.com/wiki/The_Loneliest_Robot_in_Great_Britain?oldid=1237666"
Community content is available under CC-BY-SA unless otherwise noted.