The Liberty Jam is a radio station in Grand Theft Auto: Liberty City Stories, hosted by DJ Clue. The station plays East-Coast hip-hop, East Coast gangsta rap, hardcore hip-hop and Mafioso rap, all which were very popular during the mid-and late '90s especially when it was on the rise again (thanks to rappers Nas, Lil' Kim, Jay Z and the late Notorious B.I.G., Big Pun and DMX) after West Coast hip hop was dominating during the early and mid '90s.

The exact name of the radio station is inconsistent. The DJ, in all but one radio imaging, simply refer to the station as "Liberty Jam" with only "FM" or "101.3" augmented into the name; in addition, neither of the two versions of the radio station's logos (from the website or the audio options) use the article.

On the other hand, the manual of the game, as well as the game's audio options, refers to the station as "The Liberty Jam", with the aforementioned single radio imaging following suit.

Liberty Jam's airtime is primarily occupied by "The Desert Storm Show", which DJ Clue hosts. Often times, DJ Clue will announce multiple shoutouts to various individuals (including 8-Ball) between songs, and occasionally insert his own voice-overs into tracks in the same fashion as MC Codebreaker at MSX FM/98, albeit in a lower frequency. Certain tracks are also bridged by transitions.

The station replaces Game FM as the sole hip-hop station in GTA Liberty City Stories, circa 1998, and is implied to be the chronological predecessor to Game FM. It is also the Diablos favorite radio station. 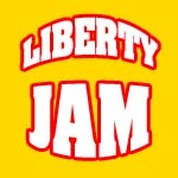