Standard White - 100%
“Monster trucking - it's amazing what drunken rednecks will call a sport. Raise your game in the Los Santos road rage wars with The Liberator.”

Being modeled as a high-performance monster truck, The Liberator features a fiberglass body mounted over a frame chassis. The front end of the body features a small bumper and a silver rectangular grille with dual mesh pattern and the Vapid logo on the center of the horizontal separation, while the sections beside the grille bear four decals emulating fake headlights. The sides have large arches with high clearance for the large unproportional wheels, while the area behind the cabin covers most of the rear section. The rear end also has decals emulating fake tail lights, with the unique cosmetic feature being two American flags.

The truck features a realistic tube-frame chassis (real-life monster trucks use these to maintain the truck's integrity on hard hits; a normal truck would simply break apart), with quad shock towers and sway-bars to maintain the realism of what a normal monster truck would have to offer. The truck also appears to have four torsion bars or kicker braces, which run from the center of the metal chassis down to the suspension lever arm.

The interior of the vehicle is mostly stripped down, having the essential components on the front, race-type seats, and a fire extinguisher strapped to the lower frames, as well as the engine and bug catcher just behind the seats. In the enhanced version, the vehicle uses the same dial set from muscle cars such as the Dominator, the Buccaneer and the Ruiner.

The Liberator always spawns with an American livery, displaying the vehicle's name and sponsors around it (Atomic, Redwood Cigarettes and Shrewsbury), while the frame chassis is assigned with the secondary color, which alternates between white, red and blue (the colors of the American flag). In the files, the vehicle is always set to spawn in white, although only the inverse panels feature white trimming. The vehicle uses large off-road wheels, which appear to be a monster variation of the "Mudslinger" off-road wheels seen in Los Santos Customs and other mod shops.

The Liberator is a very high-performing vehicle, having a decently high speed that allows it to keep up with almost all "normal" cars in the game. Although having a lesser number of gears compared to most regular cars, it is the fastest accelerating four-wheel-drive vehicle in the game, reaching its top speed in very little time. For a vehicle of its size, The Liberator has surprisingly good handling, as it remains generally stable at high speeds and rarely loses control, possibly due to its large, thick tires. Just like the Insurgent and Technical, The Liberator's tires are completely impervious to all forms of damage. It is also known to be completely immune to fall damage; it does not explode upon impact on the ground even when falling upside down.

The Liberator is one of the few vehicles in the game to feature four-wheel steering, and this results in the vehicle having an impressive turning radius, which is more noticeable at lower speeds. The truck, not surprisingly, has a very high damage tolerance, meaning it is very hard to destroy, although it can still be blown up by one sticky bomb and can eventually be destroyed by thousands of gunshots at higher wanted levels. Also, as expected, the truck can crush certain vehicles and do tricks in the air. Due to GTA V's driving physics, The Liberator does not bounce when falling from a stunt jump, but it will just "crash" on the ground.

The Liberator is powered by a high-output supercharged V8 coupled to a 3-speed gearbox, powering the four wheels in a 20% front and 80% rear torque distribution. The vehicle uses a high-output and roary engine sound.

The Liberator on the updated Rockstar Games Social Club.

The Liberator in the cinematic preview on Rockstar Games Social Club.

The Liberator stomping on an Emperor.

Size comparison between the Liberator and the Dubsta 6x6.

The Liberator parked at Rebel Radio Building in enhanced version of GTA V.

Comparison of the Marshall with the Liberator. (Rear view)

The Liberator with no hood. 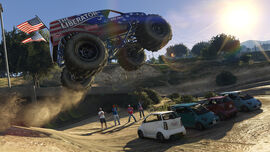 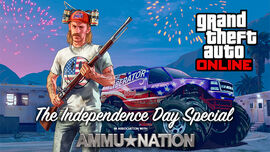 The Liberator as shown in the artwork for the Independence Day Special.