This opening scene features LSPD Officers Frank Tenpenny and Eddie Pulaski having just come from a meeting with an unnamed individual who Tenpenny refers to as "that fat fuck" and "that over-sized asshole". This could refer to either Big Smoke, who lived in Ganton prior to the events of GTA San Andreas, or Big Bear, whose former residence was the Ganton Courts shown in the cutscene. Pulaski asks Tenpenny what they are going to do about the new LSPD officer, Hernandez, coming on board with them. Tenpenny states that he is not worried about Hernandez, but says another LSPD officer, Pendelbury, is a bigger concern to their operation. Tenpenny states that if Pendelbury does what he is threatening to do, then they will have a bigger problem with him.

As Tenpenny and Pulaski drive off, a scene shows three Balla members in an alleyway. One of them states that the Grove Street Families will soon be over, while the Balla member wearing the black jacket expresses concern on whether or not they can trust one of the betraying members of Grove Street, worrying that it may be a trap. The third Balla gang member says that things change, and money changes people.

The next scene shows Grove Street members Big Smoke and Ryder talking in the kitchen of Ryder's house. Smoke tries to get Ryder on board while Ryder says that he needs to be in charge of his destiny. Smoke states that he has Ryder's back and that they have no choice, and have nothing to feel bad about. Ryder accepts Smoke's offer.

The next scene is in San Fierro, which shows a man named Mendez brutally assaulting an unnamed gang member, which is stopped by another man named Toreno. Toreno tells Mendez that he has found a buyer in Los Santos. Toreno then receives a phone call while Mendez continues to beat the unnamed gang member to death against a shipping container for snitching. Toreno tells Mendez that they need to be more productive and that he has a connection in Panama that can supply them with as much product as they need. Both men leave the scene as Mendez drags the body of the gang member away.

The next scene shows Smoke and Sweet playing dice in the street with some Grove Street gang members. Smoke tries to tell Sweet that they're losing the streets, to which Sweet replies that they are standing by their principles. Smoke goes on about how Grove Street is getting weaker, while the Ballas are getting stronger. Just then, Sweet and Smoke's gangster wannabe friend Jeffrey interrupts. Jeffrey states that he wants to be called "OG Loc" because it's a more gangster-sounding name. Sweet tells Jeffrey that he has not put in any work for the set and despite being a friend, he is not a gangster, much to the chagrin of Jeffrey. Sweet and Smoke tell him to go to college and make something of himself. He says to Jeffrey; that Smoke and himself messed their lives up by getting caught in the gang life. Jeffrey leaves as Smoke goes on about a money making opportunity, to which Sweet expresses no interest and states that he is strictly in it for "the hood". Smoke then asks Sweet if he has heard from CJ lately. Sweet says that they aren't speaking. Smoke brings up their late brother Brian. Sweet says that he lost two brothers. One of them got killed, and that the other is running around on the East Coast like a fool.

The next scene shows CJ walking in the streets of Liberty City in the Red Light District, near Luigi's Sex Club 7, looking for cars to steal. He initially has no luck as the cars parked along the sidewalk are all locked, but eventually he sneaks up and carjacks a random pedestrian at the traffic lights. CJ speeds away and calls a guy named Joey, letting him know that he has the car he was looking for.

CJ says that he never knew his father and that his brother used to make his life hell. CJ then says that he needs to get the car off the streets, possibly knowing that the LCPD would be looking for it. After a brief conversation, CJ hangs up the phone and drives off.

The next scene shows Salvatore Leone talking to Johnny Sindacco in Salvatore's home in the Saint Mark's district of Liberty City. Johnny wants Salvatore to invest $5,000,000 in the Sindaccos' casino. Johnny then tells Salvatore that his father wants to unite the Sindaccos and Leones. Salvatore brings up Johnny's associates "whacking" his cousin. Salvatore says that he wants to see past it all and states that business is business. Salvatore accuses Johnny of trying to take advantage and treat him like an idiot. Johnny apologizes, and Salvatore says that he will invest the $5,000,000 if he gets control of the books. Johnny states that he can't do that, which angers Salvatore. Salvatore then requests that they bring in a third party to run the place while they "run him". Johnny states that they already have a guy running it, to which Salvatore tells Johnny to get rid of him.

The next scene cuts to Fort Carson and shows Ken Rosenberg walking out of Fort Carson Medical Center. Ken is shown talking to himself saying that coke is for the weak and he is in control of his own destiny. He goes on wallowing, expressing that he needs a job; but then celebrates being clean while attempting to hitchhike.

The next quick scene shows a green Sabre pulling out of a garage and driving slowly down the street.

Ken Rosenberg is shown talking on a payphone asking to speak with Tommy Vercetti. Rosenberg argues with someone over the phone for refusing to put him through to Tommy, stating that he made him who he was. The phone hangs up and Ken slams the receiver down.

The next scene cuts to Salford, England, which sees Kent Paul and Maccer in a recording studio. Paul announces to Maccer that he is the new manager of The Gurning Chimps.

The two then share a hug to celebrate. Maccer then expresses his excitement about visiting America.

The video cuts back to Liberty City and shows Carl walking down an alleyway. He passes a random man and then pulls out a gun. He shoves the man up against the wall and demands the man give him money. The man gives Carl everything he has, and he pistol whips the man before leaving.

The next scene cuts to Bone County, where we see two unknown Sindacco gang members in the desert, with one of them digging a grave for Mickey, who is now deceased. The other members asks him how his wife is doing, to which the man digging responds that all his wife wants to do is spend money ever since they moved to Las Venturas. He then asks why they had to kill Mickey. The other gang member stated that it was because he was declaring too much money, and that he heard the Leones are lending them money, so they killed Mickey in exchange. After a brief conversation, the two Sindacco gang members bury Mickey.

The green Sabre is once again shown driving down an alleyway in Willowfield.

The next scene shows Tenpenny and Pulaski picking up Officer Hernandez from the Los Santos Police Station. Hernandez tells them that he joined C.R.A.S.H. to put an end to gang crime after working on the streets for 3 years. Hernandez tells the story of a dispute case he was on, with a twenty-year-old hitting his wife who was letting her kids starve. Hernandez says that he was at a dilemma to either let the man walk free from beating his wife, or take the man in and leaving the kids with a drug addict for a mother in the meantime. Pulaski pulls over on orders from Tenpenny, who mentions that he has worked with drug dealers, gang bangers who are not afraid to kill their families. Tenpenny questions whether he can trust Hernandez because he gets easily confused. Hernandez agrees to do whatever it takes to make it. Tenpenny and Pulaski tell him that there will be times where they need to let a bad guy go or look the other way. He then orders Hernandez to get out of the car, which he does.

The green Sabre is shown for a third time driving down the street in the Ganton area towards Grove Street.

The next scene cuts back to Las Venturas and goes past the casinos in the area. Ken Rosenberg is seen sitting back in the casino office just as Salvatore Leone and a gang member walk in. Salvatore starts getting angry at Ken for sitting around. Salvatore puts a gun to Ken's head and tells him that he wants his money that he invested into the casino back. Salvatore demands Ken get the money fast as Ken fears for his life. Salvatore then tells him to have some fun, and then orders Ken to go get him a drink.

The last scene shows the green Sabre being driven down Grove Street. When the Sabre reaches the Johnson House, a member of the Ballas opens fire on the house, before the car speeds off. A Grove Street Families homie fires on the car, trying to get revenge, but fails to stop the Ballas from escaping into the night. Sweet rushes inside the house to find his mother dead from the shooting. He then rushes back out to stop Kendl from entering the house and seeing the carnage.

The next part of the scene shows Kendl sitting on the front steps of the house weeping as sirens are heard approaching the Grove Street cul-de-sac while Sweet calls Carl to inform him to come home and explains to him that their mother is dead. The final shot sees Carl sitting behind the wheel of a car after hearing about his mother's death, unable to believe he's lost another family member.

A caption reading 'Welcome to San Andreas' appears as the video ends. 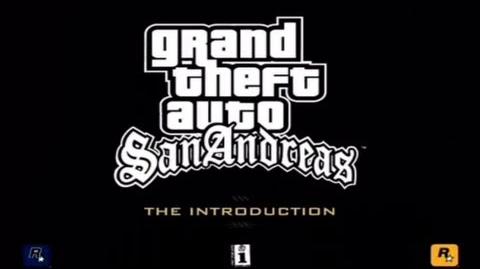 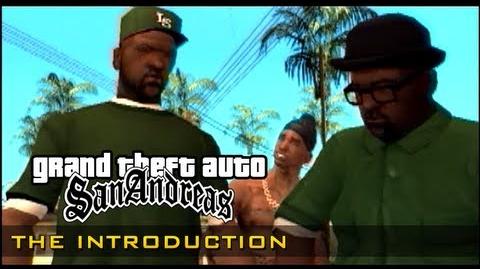