Wasted
Busted
Playboy gets away
Dwayne gets away

The Holland Play is the final mission given by Playboy X in Grand Theft Auto IV. It is unlocked after completing Photo Shoot for Playboy X and Undress to Kill for Dwayne Forge.

The mission consists of two parts; the first part is a cutscene for the player to think about the decision they will make, and the second part is carrying out that decision.

Playboy calls Niko and asks for him to meet at his apartment. When Niko arrives, he hesitantly asks Niko to kill Dwayne. Niko, after first refusing, says he will think about it. Soon afterwards, Niko receives a call from Dwayne asking him to kill Playboy. After another call from Playboy, the second part of the mission begins and the player is given a choice as to who to kill.

“I was someone, you know. I made it. I changed the game.”

Playboy is surprised to see Niko back at his apartment so soon. Quickly learning that Niko is going to kill him instead, Playboy readies his bodyguards and escapes from his balcony. After a short chase on the street, Niko corners Playboy in an alley, beating on a locked door. His Combat Pistol, either jammed or empty, is unable to shoot Niko and he drops it to the ground, surrendering. Niko executes Playboy by shooting him in the throat.

After killing Playboy, Niko calls Dwayne to inform him while adding that Playboy had first asked him to take out Dwayne. Lamenting his death, Dwayne offers Niko Playboy's apartment, refusing to use it himself as it would remind him too much of Playboy. Dwayne asks Niko to stay in touch in the future.

After calling Dwayne, Niko can call Roman. Roman had hoped Dwayne was paying him a lot of money, though Niko explains Dwayne couldn't, and he felt it was the right decision.

“Fuck you, man. You a fucking snake like the rest of them.”

Dwayne is saddened by Niko's appearance, as he thought Niko would be on his side in the matter. After Niko fights only one thug with a Baseball Bat, Dwayne puts up no fight. Both Niko and Dwayne face away from each other as Niko shoots him in the back of the head.

After killing Dwayne, Niko calls Playboy to inform him. Niko is paid for his actions but is also criticized by Playboy, as Dwayne was seen as a mentor and father figure to him. Playboy then cuts all ties with Niko.

After calling Playboy, Niko can call Roman. Explaining the situation, he sounds unsure about his choice. Roman tells him not to worry and enjoy the money. 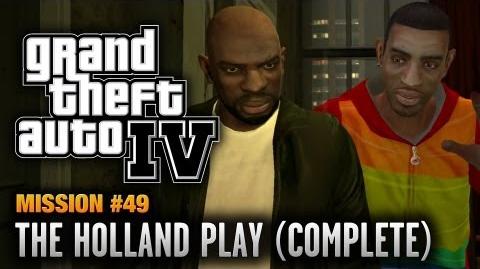 The rewards for this mission differ depending on who was killed: