Unknown
“I'm about done with you, homo.”

The Hater is a minor character appearing in Grand Theft Auto IV.

Known as the Hater, he is a homophobic bully in his mid-20s who lurks in Middle Park and often beats up and threatens homosexuals. He is first mentioned in the game in a internet article from Liberty Tree, the article calls him a "gay basher" and mentions that several attacks against gay men have been happening in the park during just a couple of weeks.

It is unclear why he is attacking gays, but it is assumed it had something to do with his childhood as he references that his father never loved or appreciated him. His appearance is random at times, but he will mainly have short hair and a goatee.

In the events of GTA IV, Bernie Crane informs Niko Bellic that he is being hassled by a homophobic 'hater' whenever he goes jogging or does aerobics in Middle Park. He claims that he is trying to kill him and that he doesn't know what to do. So, closely followed by Niko, Bernie goes out jogging in Middle Park and, sure enough, the hater attacks Bernie with a baseball bat, proclaiming he has had enough of him. When Niko confronts him, the hater calls him a 'fag lover' and quickly flees the scene on a Faggio. Here, the player can either take him down quickly or chase him down. Either way, the hater is killed. 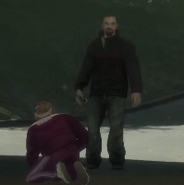 Another appearance of the hater.