Logo seen on the game's manual.

The Four Dragons Casino is one of the three accessible casinos in GTA San Andreas (along with Caligula's Palace and "Casino Floor"). Designed in a distinctively East Asian theme, the casino serves as the Triad's hub of operation in Las Venturas (although no group of Triads can be seen outside the casino) and thus serves as a contact point for Wu Zi Mu in the city and later, the organization point for the casino heist mission strand.

Being an accessible casino, the casino's interior is also decked in oriental styling, and offers CJ access to various playable gambling facilities, including blackjack and roulette tables, video poker, slot machines, as well as various wheels of fortune; security personnel in suits are also numerous in the casino floor, being programmed to attack the player if they choose to behave violently in the casino. Other accessible features within the casino are non-interactive, including a central bar (where female bartenders dressed in cheongsam-like minidresses work), the dining area of its restaurant, and a golden statue of Buddha with reels from a slot machine resting on a pile of coins.

The casino additionally provides the player with a save point outside the entrance available after "Learning to Fly"; weapons also spawn in front of the entrance as a reward for collecting all horseshoes in and around the city.

The Four Dragons Casino is suggestively based on the Imperial Palace Hotel and Casino in Las Vegas, Nevada, which operated from 1979 to 2012 under said name. In 2014, it was renamed The Linq.

There are two interiors in The Four Dragons Casino that are normally inaccessible to the player. These interiors are seen only during cutscenes. The first is a management room only seen during the cutscenes for the missions "Fender Ketchup", "Explosive Situation", "You've Had Your Chips", "Fish in a Barrel" and "A Home In The Hills", comprising a large room with a desk, fish tank, and CCTV screens. The other is a custodian closet in the basement of the casino, containing a broken slot machine, a generator, and an air vent; it is seen in several missions, specifically being used for planning in the heist missions.

The interiors can be accessed through the use of cheats (allowing access into the interior realm) or modifications.

The casino floor of the The Four Dragons. 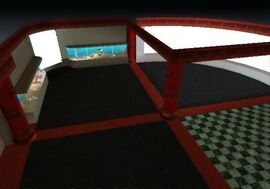 The inaccessible management room of the casino.

The inaccessible janitors room of the casino. 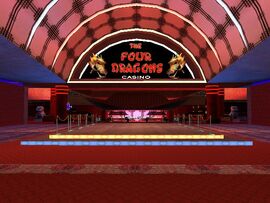 Interior of the Four Dragons casino.