GTA Wiki
Register
Don't have an account?
Sign In
Advertisement
in: Missions, Missions in GTA Online, Heists,
and 3 more
English

View source
watch 02:19
Wiki Targeted (Games)
Do you like this video?
Play Sound
For an overview of the entire Heist, see Fleeca Job.
Not to be confused with The Bank Contract.

•Get in the Kuruma.

•Take the Driller to Fleeca Bank.

•Wait for the Driller to unlock the vault.

•Take out the cameras.

•Wait for the Driller to get in the Kuruma.

•Go to the pick-up point.

•Go to the safety deposit box.

•Get in the Kuruma.

•Fail to be picked up by Cargobob on the bridge.

Fleeca Job - Kuruma
“Take down the Fleeca franchise. The driver controls the crowd. The driller gets box 167 from the vault. Then everyone gets out and gets away in the Kuruma.”

The first time a player starts this heist, there will be no leader set-up cost, as Lester covered it up. Subsequent replays incur 10% of the base total payout, $11,500.

The crew of two players will be tasked by Lester Crest to steal bonds from safety deposit box 167 at the Fleeca on the Great Ocean Highway in Banham Canyon.

After completing the set-up missions, the finale sees the two players take up the role of Driver and Driller. By default, the host is assigned as Driller with a 60% take and the crew member as Driver with a 40% take, but this can all be changed once the game finishes introducing the heist board.

The Driver takes control of the stolen armored Kuruma and drives to the Fleeca Bank with the Driller on board. If the Driller has not completed the hacking minigame yet, the Driver must wait until the other player completes said hacking. After arriving at the destination, they both equip masks and go into the bank.

The Driver controls the NPC witnesses and shoots out the four ceiling-mounted security cameras; the crew is provided Pump Shotguns for this. The Driver must destroy the cameras quickly. An on-screen indicator shows the driver the level of intimidation. They must not kill any of the witnesses but if the intimidation level drops to the minimum, the teller will trip the alarm to alert the police. Once the Driller secures the deposit box, the alarm will go off and the Driver is free to run for the Kuruma and wait for the Driller to get in.

The Driller boards the armored Kuruma as a passenger. While the Driver gets to the bank, the Driller hacks their security system with the same hacking minigame as the previous mission. Just like before, the minigame consists of the player moving a constantly moving line from a start point to an end point. If it touches anything but the exit it fails and has to be restarted. There are 3 levels with each one increasing the difficulty of the maze. Continued failure slows down the speed of the point but reduces the achievement level. After completing the minigame, the player is directed to use the cellphone to unlock the bank's vault and equip the given mask to go into the bank.

While the Driver controls the witnesses, the Driller goes to the safety deposit boxes at the rear of the bank and plays a drilling minigame to open up the box and take the contents. The Driller's goal is to drill through the lock of Safety Deposit Box 167 (represented on the HUD as a 2D lock mechanism with four pins). If the drill is pushed too hard, it overheats, turning the bit red and taking a few seconds for the bit to cool down. The Driller controls the speed the bit turns using the controller trigger (or the assigned "Fire" button/key on the PC), and how hard the bit is pushed into lock using the left analog stick for controllers/pushing the mouse forward to push in or drawing it backwards to back off on PC.

After the opening the deposit box, the crew will get a three-star wanted level. They return to the Kuruma and Lester will say that he has paid a getaway guy, who is waiting for the crew at the Zancudo Bridge. There will be multiple police roadblocks along the way, consisting of Police Cruisers and Sheriff SUVs. The "getaway guy," Eddie Toh, will be piloting a Cargobob with an electromagnet; drive below the magnet and match the Cargobob's speed before reaching the tunnel so he can pick up the crew and escape from the police.

After the getaway, a cut-scene is triggered where the crew arrives at the factory, with Lester stepping outside and receiving the deposit box from the driller. He congratulates the crew, stating that he will call them up again "if the thing that they talked about comes up", but warns them to "not get clingy".

After the cutscene, the mission is completed. The two players are then seen in a cut-scene celebrating over a beer at the Tequi-la-la, before leaving the place on their own, regaining control in Free Mode.

“There's your FSA fine, Fleeca fucks!
Uh, you'll sleep well tonight. We all will. Enjoy the spoils while you can.
I'll be back in touch if there's more work down the road.”

Lester will be in touch soon with details of another Heist.

The bonus for completing the Elite Challenge in the Heist Finale is $50,000. 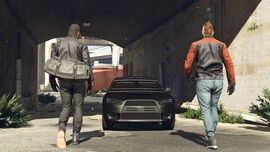 The team picking up the Kuruma. 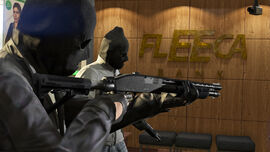 The crew inside the bank. 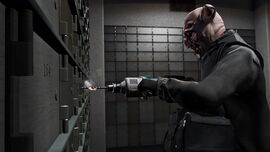 The driller drilling the box open.

The police chase as seen in the trailer. 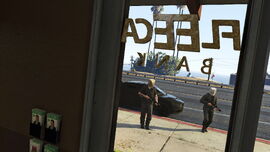 Screenshot of the heist. 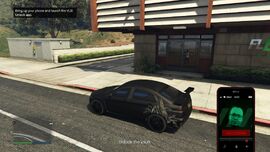 Unlocking the vault using the phone. 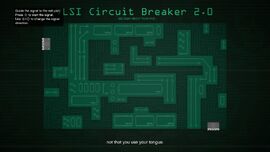 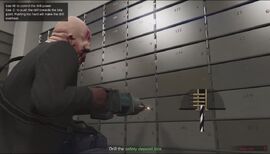 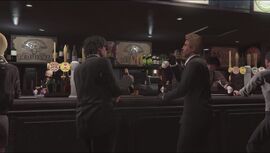 The crew celebrating in the Tequi-la-la.