GTA Wiki
Register
Don't have an account?
Sign In
Advertisement
in: Missions, Missions in GTA IV, Side Missions, Assassinations
English

In-game time
“Everything is taken care of, brother.”
— Niko Bellic

The Fixer's Assassinations are a string of assassination missions given to the player in Grand Theft Auto IV.

Niko Bellic can do the missions by visiting a payphone at the Odhner Avenue-Traeger Road intersection on the western fringe of Port Tudor with Acter in Alderney, where a cutscene shows The Fixer briefing Bellic. It is not required to complete these missions to continue with the storyline, but they do count towards 100% completion of the game.

Following Phil Bell's first mission, he will call the player's character, Niko Bellic, stating that someone has some side-jobs for him. A man known as "The Fixer" wants Niko to assassinate some enemies. To start these missions, the player should go to a designated payphone marked with a crosshair icon, and walk to a payphone to contact "The Fixer".

For every mission, the player will be provided information on where the target is, along with a body armor and a specific weapon suited for the mission in hand behind the pay phone. Like Brucie Kibbutz's exotic exports and Stevie's car thefts, individual assassination missions are played out in random order. In addition, the missions predominantly take place in Alderney. 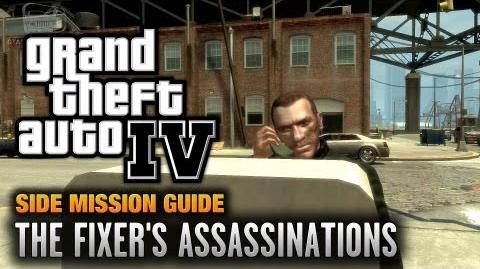 When the player succeeds in completing all his assassinations, Niko contacts The Fixer about his success in the last assassination mission:

Niko: It is now time to collect from the client.
The Fixer: You've done good brother. Cleared a lot of files from my desk. Can't use you no more though. A man loses taste for this kind of work after a time. I can't run that risk with a partner.
Niko: I understand. This is not the type of thing you want to develop a taste for.
The Fixer: Be cool, brother. Keep your senses alert and you might make retirement. Not many in this game cross that line. So long.