Ricardo Diaz firing his gun whilst Victor Vance looks on

In-game time
“I'm playing both sides. I made a little deal with the DEA. I hand over two hundred kilos of that cocaine you and Quentin stole from Gonzalez and in exchange, they're gonna give me some serious guns!”
— Ricardo Diaz

The Exchange is a mission in Grand Theft Auto: Vice City Stories given to protagonist Victor Vance by drug baron Ricardo Diaz from his mansion on Starfish Island, Vice City.

Victor Vance was ordered to steal some of Gonzalez's drugs by Diaz, and Diaz has made a deal with the DEA, sending his men to a meeting with the DEA. There, his men will give them 200 kg's of the cocaine and in return, the DEA will give them heavy guns. Victor and a goon drive the drug-loaded van to the meeting point at the car park in Downtown, but are ambushed by Gonzalez' goons, who kill one of Diaz's gang members on roof tops using Sniper Rifles. Victor then clears out the place and kills all the enemies before the DEA arrive. When the deal is made, Victor drives the truck with the guns to Diaz's mansion while being chased by Gonzalez' men, but he manages to make it.

The reward for this mission is $1750 and the next mission, Farewell to Arms, is unlocked. 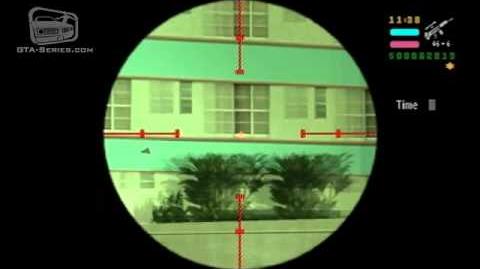