In-game time
“Since you got the cutting saw and that schedule, it's time to go grab them ECUs. Stop that train and get on board wit whatever moves you got. Freights en route. That's French for you better move yo ass if you wanna catch that ride, boo.”

The E.C.U Job finale is a Contract introduced to Grand Theft Auto Online in the Los Santos Tuners update. It is the final mission of The E.C.U Job strand.

The player is instructed to go to the ambush point in the Grand Senora Desert and stop the train by destroying the four brake cylinders on either side of the main unit. There will be Merryweather soldiers on board of the flat cars, as well as an Annihilator Stealth escorting the train, which will attack the player on sight and must be taken out.

After destroying the cylinders, the player has to search through the containers to find the engine control units, while dealing with oncoming Merryweather soldiers arriving in Rumpo Customs and Mesas. Sessanta will send a message displaying the registration codes of the target containers. After picking the first unit, Buzzard Attack Choppers start arriving to the area in an attempt to take the player out.

If the player somehow fails to stop the train, it will eventually arrive at a crossing in Elysian Island, and there will be various Merryweather soldiers on the site, alongside the ones arriving on the aforementioned vehicles.

Once the units are collected, the player has to make their way to the drop-off in either the parking buidling in Pillbox Hill or behind the Los Santos Customs in Burton. More Merryweather units will chase the player down, but they will eventually stop once the player is near the drop-off. Once the player arrives there, the mission is completed.

The freight train being escorted by an Annihilator Stealth.

The cylinders being destroyed.

Using the power saw on the container.

Closeup of the engine control unit.

The player being pursued by Merryweather. 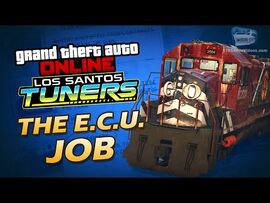