• ­Get into the Barrage or the Khanjali.

• ­Wait for your team to get into the same vehicle.

• ­Go to the tunnel entrance.

• ­Go through the tunnels.

• ­Get to the control center.

• ­Wait for the rest of the team to arrive.

• ­Go to an Orbital Cannon.

• ­Deliver the Thruster to the Obersvatory.

• ­Help deliver the Thruster to the Obersvatory.

• ­A World Worth Saving Achievement/Trophy (Heist leader only)

• ­All In Order II Award (optional)

"A Missile Launch Base has fallen into the wrong hands. Storm the base, clear it out, stop the warhead from launching, and save the day."
— Description

The Doomsday Scenario is the final part of The Doomsday Heist. Players are in a race against time as they infiltrate a secret doomsday facility that was sealed away for decades within Mount Chiliad before Avon Hertz and Cliffford can launch a nuclear warhead to destroy all of humanity.

Players are tasked to go to a lot in Grapeseed, where the team can choose from either the Khanjali tank or the Barrage ATV to use in the team's assault of the missile base. The team can only choose one vehicle, with the other being sold to gain an extra amount of cash at the end. Once the team's vehicle is chosen and every player is on board, the team must drive to the tunnel at the Chiliad Mountain State Wilderness, where the secret entrance to the missile base will open behind a set of electrical boxes.

The team must use their vehicle to drive through the tunnel, fighting off Avon's men. After reaching the end, the vehicle will be disabled by spikes on the road, where four Juggernauts will ambush the team. When they are dealt with, the team must move through the base on foot, dealing with more of Avon's men as Cliffford taunts the team. Eventually, there will be a fork in the tunnel, which diverges off into two different areas. In both of these tunnels are a combined total of five supply crates that the team must destroy. Once all five are destroyed, the paths will reconnect. After dealing with more of Avon's men and two more Juggernauts, Cliffford will begin the launch protocol for the warhead. The team will encounter a locked door, which is opened by Cliffford after he is tricked into opening it by Lester.

The team must now go around a large square room and hack into four terminals, which will cripple Cliffford and abort the launch of the warhead. Once all four are done, the team can go to the top floor, where four Orbital Cannon weapon systems are available to use by all four players. The team must use the cannons to destroy four mobile cloud servers around the state, which will destroy Cliffford once all four are down. Afterwards, Lester will locate Avon trying to escape. The team must press on through the facility, fighting their way to the silo itself, where Avon escapes with the use of a Thruster jetpack. The team then takes their own Thrusters and gives chase, ultimately shooting Avon down and killing him whilst dealing with several attack helicopters.

With the deed done, the team regroups at the Galileo Observatory, where Mrs. Rackman will thank the team for their efforts, awarding them with a large sum of money before leaving with Agent 14. Lester then thanks the team as well before parting ways, ending the heist. 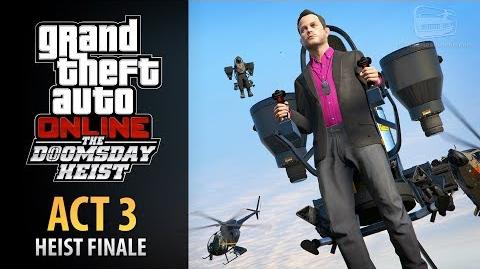 Retrieved from "https://gta.fandom.com/wiki/The_Doomsday_Scenario?oldid=1189745"
Community content is available under CC-BY-SA unless otherwise noted.