Start a Wiki
watch 01:05
'GTA' Lore: The Doomsday Heist
Do you like this video?

• ­A World Worth Saving Achievement/Trophy (Heist leader only)

• ­All in Order II award (optional)

"There are three ways to acquire Heist Prep Equipment. By completing Freemode Preps, stealing it from rival Heist Crews or by purchasing the equipment directly."
— On-Screen instruction

This Heist can only be played while being in a CEO or VIP Organization or being in a Motorcycle Club and the CEO/VIP/MC President must own a Facility in order to start The Doomsday Heist.

Unlike previous Heists, all missions in the Doomsday Heist can be completed with a minimum of two players (as opposed to the original Heists, which required four, with the exception of the Fleeca Job), allowing a larger payout during the Finale of each Act if played with fewer players. Each Crew Member has a 15% Cut minimum of the Heist's earnings during the Finale.

Also unlike previous Heists, Prep Jobs are featured in the three acts of the Doomsday Heists: These are required in order to progress to the Setup missions. Prep Jobs are completed seamlessly in public Freemode sessions and players have the option to do the mission, steal the equipment from rival CEO/VIP Organizations and Motorcycle Clubs, or buy the equipment; however, these missions can be completed by the CEO/VIP/MC President themselves without any other member in the Organization/MC, though it is not recommended, as there could be PvP action. You can only steal equipment from other Heist crews when they have the same Prep jobs available and are in the same Act of the Doomsday Heist.

Preparation and setup jobs may be completed in any order within each Act.

"Help Avon Hertz in tracking down multiple data breaches to protect the government from being attacked."
— Overview

"Fight your way through a security team to access the garage where the Deluxos are stored."
— Brief

"Use the Deluxos to get close to multiple target vehicles and hack them to recover the data packages."
— Brief

Trade price for the Deluxo.

"Infiltrate the control tower at Fort Zancudo to download the location of the Akula helicopter."
— Brief

"Land on the roof of the N.O.O.S.E. Government Facility and infiltrate the server farm undetected to recover a data cache."
— Brief

Trade price for the Akula.

"Rush to an IAA base under the Satellite Relay Station in the desert. Foreign players are attacking and trying to hack government servers - they need to be stopped."
— Brief 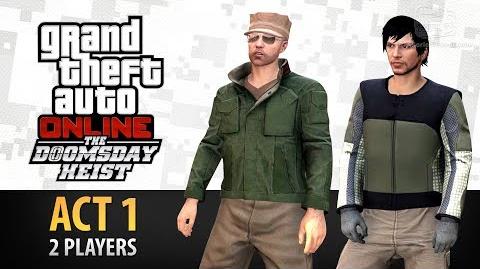 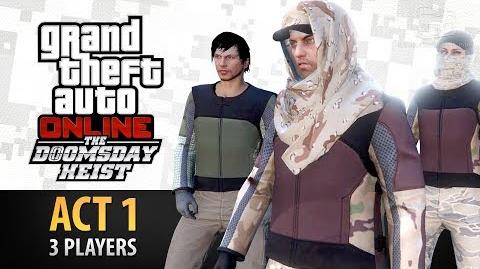 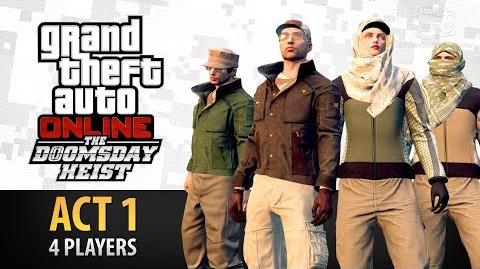 "Work with the IAA to eliminate enemy agents operating throughout San Andreas and prevent a war."
— Overview

"Enter the hangar at Los Santos International Airport and steal the Avenger aircraft from Merryweather."
— Brief

"Take out Agent ULP's kidnappers and recover information on where he's being held."
— Brief

"Start a riot and wait for private security to respond with a Riot Control Van."
— Brief

"Use the water cannons on the RCV to prevent the Russian agents from destroying stolen hard drives."
— Brief

Trade price for the RCV.

"Find and steal trucks that are carrying some wrecked Strombergs."
— Brief

"Assault a barge off the coast and steal the torpedo electronic control units from arms dealers."
— Brief

"Use the Strombergs to destroy a convoy before heading underwater to scan the submarine."
— Brief

Trade price for the Stromberg.

"Launch an operation on a foreign submarine lurking off the coast. One team boards through an airlock and diables the sub, while the other holds off enemy agents in an aircraft above."
— Brief 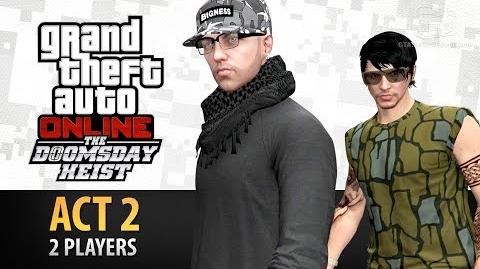 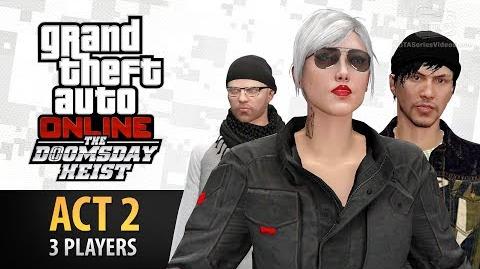 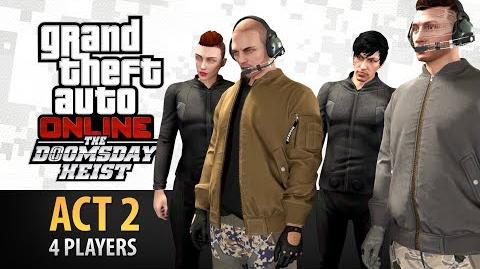 "San Andreas's defense systems have been high-jacked. Save agents and stop the build-up of weaponry to save the world from destruction."
— Overview

The players must arrive at a specified location and steal a seemly unguarded cash bag. After picking it up, all Organization/MC Club members get a 4-star wanted level. The wanted level must then be evaded before the players can deliver the bag back to the facility.

Players must head to Pacific Allied Shipyard and when entering the vicinity, they may randomly get a 1-star wanted level and must lose it before progressing. The Organization/MC is then tasked to take 10 photos of specific parts of the shipyard where the deal takes place in Setup: Rescue Agent 14 and send all of them to Lester. When Lester has all the required photos, players must leave the area and the prep concludes once everyone left the area.

"Head to the Pacific Allied Shipyard and attempt to purchase Agent 14 from Merryweather Security."
— Brief

Players are tasked to steal a Chernobog in a Merryweather Training Site, where the Chernobog, 1-2 Merryweather Mesas, and a Rhino Tank will be found along with around 10 enemies guarding the area. Upon arrival, all must be killed, and two of the enemies will have one Railgun each (unobtainable). Once all mercenaries are dead, the Chernobog's driver will run away and it can be stolen (Driver is not required to be killed), and the Rhino Tank can be used by another player to escort the Chernobog - Which may need the latter to slow down so the former can catch up - Up to 4 waves of 2 Mesas filled with enemies will attempt to intercept the Chernobog. The perp concludes when the Chernobog is delivered. No wanted level can be gained for the duration of the prep.

"Use the Chernobog to escort and protect Agent ULP as he makes his escape from his captors."
— Brief

Trade price for the Chernobog.

"Intercept an arms dealer's air convoy and take down a heavy-lift chopper to recover the Barrage ATV."
— Brief

Trade price for the Barrage.

Players will arrive at the house of one of Avon's engineers. Lester suggests the players take a stealth approach, though it's not required. There are three guards outside that must be taken out in order to progress inside the house. Once inside the house, the players must find a supply crate that contains a laptop, which one player should retrieve. In order to remain undetected, it is recommended to do this alone, staying in stealth mode and killing the guards using headshots from a silenced weapon. If this is successful, the laptop can be delivered immediately without any trouble. However, if the guards are alerted in the process, the players will face a 3-star wanted level once they escape, not to mention Cliffford Mercenaries will also send Dubsta6x6s to defeat the players. They will never give up, and the wanted level must be lost before the laptop can be delivered to the facility.

"Destroy a supply of the enemy's weapons at a scrapyard in the Grand Senora Desert and steal the Khanjali."
— Brief

Trade price for the TM-02 Khanjali.

"Use a Volatol jet to destroy multiple SAM turrets around Mount Chiliad."
— Brief

Trade price for the Volatol.

"A Missile Launch Base has fallen into the wrong hands. Storm the base, clear it out, stop the warhead from launching, and save the day."
— Brief

Trade price for the Thruster. 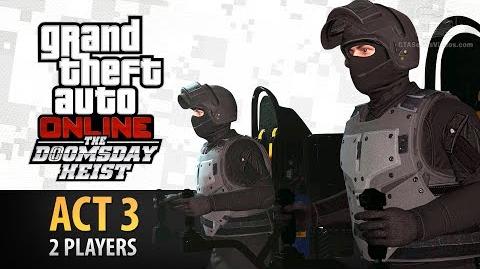 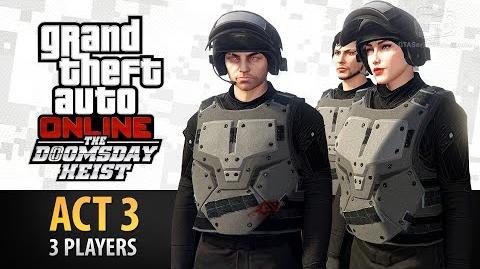 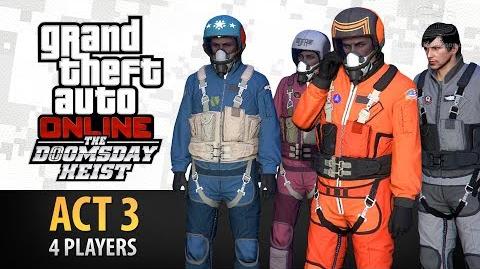 A new soundtrack was mixed for the Doomsday Heist. The soundtrack was created by Oh No and features stems reused and remixed from the original Heists Update to reflect the heists in operation. Three different variations appear, each of which have 2 separate alternative versions which play exclusively during setup work.

Retrieved from "https://gta.fandom.com/wiki/The_Doomsday_Heist?oldid=1211894"
Community content is available under CC-BY-SA unless otherwise noted.