The Diamond Program was an ongoing program added to Grand Theft Auto Online as part of the The Diamond Casino & Resort update.

The Diamond Program was added primarily to reward players for playing the update's content, such as purchasing the Master Penthouse and completing the six casino missions and Casino Work freemode missions.

The program was announced a day before the update was released, on July 22, 2019. There are four tiers that players can achieve through various means - these are the Silver, Gold, Platinum, and Diamond tier. As each tier is harder to achieve than the previous, there are more rewards for each tier.

"On July 23rd, The Diamond Casino & Resort will open its doors and become the premier destination for entertainment and luxury living in Los Santos. To celebrate the grand opening, The Diamond Program will take VIP Membership status to a new level of self-importance with an assortment of perks and rewards. The velvet rope lifts starting July 23rd, participate in the action before August 7th to take advantage of everything The Diamond Program has to offer."
―Rockstar Newswire

The first qualification period started as soon as the update was released, on July 23, and lasted until August 7. All rewards were given away between August 8 and August 13.

Purchasing the Master Penthouse (or receiving one for free with Twitch Prime) granted players Silver Status. These members later received the "She's Loaded" Wall Art and the Diamond Classic Tee.

Silver Status members who completed the second casino mission, Casino - House Keeping, were granted the Gold Status. These players later received an exclusive livery for the Truffade Thrax and the Truffade Tee, as well as all Silver Status rewards.

Gold Status members who completed five Casino Work missions for Agatha Baker were granted the Platinum Status. These players later received the Lucky 7s Tattoo and the Kronos Ära Watch, as well as all previous rewards.

Platinum Status members who completed all six casino missions were granted the highest tier possible; the Diamond Status. These members later received two exclusive vehicle liveries - one for the Enus Paragon R and one for the Annis S80RR, as well as all other rewards given to lower tiers.

"The Diamond Casino & Resort's slate of exclusive rewards expands this week with an assortment of new perks and up to GTA$400,000 in gifts. Those seeking to keep the perks rolling can play GTA Online any time before August 21 to get the latest Diamond Program benefits, detailed below."
―Rockstar Newswire

The second qualification period started on August 15, 2019 and ended on August 21. It was announced alongside the Emerus Week event. The same four tiers are available, which carry over from the first qualification period. This means players retain their status, but can increase it to a higher tier if they wish to - the prerequisites for each tier remain the same.

Regardless of the status, players still need to log in to GTA Online to be eligible for the rewards, which will be given away by August 28.

Exclusive livery for the Thrax.

Exclusive livery for the Paragon R.

Exclusive livery for the S80RR. 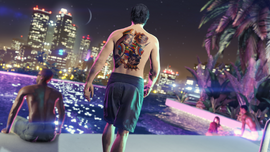 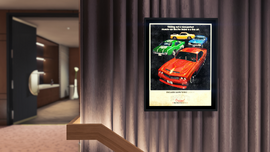 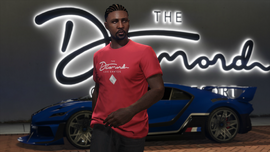