There are two types of preparation missions – required and optional. The former must be completed in order to carry out the heist, while the latter type of missions can be done to significantly lower the difficulty of the heist, but can be skipped if the heist leader wishes to do so. There are three planning boards inside the basement.

The first board allows the player to view access points that they have photographed during the Setup: Casino Scoping mission. On this board, the player can also start the previously mentioned mission, as well as Heist Prep: Vault Contents. The player does not have to scope out the Casino for every heist, but can do it as many times as they wish. However, the Vault Contents mission must be completed with every heist.

After the vault contents are identified, the player gains the option of choosing one of the three possible approaches for the heist – Silent & Sneaky, The Big Con, or Aggressive. The same approach cannot be chosen twice in a row, so the player must alternate between them. If the same approach is chosen after only one other approach, the Casino will have tougher security, but there will be more valuable rewards.

After the approach is chosen, the player can move onto the second planning board.

On the second board are listed all the main prep work missions the player can start. On the top left, the player must first choose the gunman, driver, and hacker they wish to employ for the heist. The higher their skill, the higher cut of the total money they take. A better gunman can provide the player with better weapons, a better driver can provide them with better vehicles, and the better the hacker, the more time the players will have inside the vault before they are detected. Only after the player chooses a gunman and driver can they access other missions.

Once the player chooses a gunman, they can start the Heist Prep: Unmarked Weapons mission, in which they need to source weapons to use for the heist. When a driver is chosen, the Heist Prep: Getaway Vehicles mission can be started, where the player needs to obtain vehicles to use after robbing the Casino. Once a hacker is chosen, Heist Prep: Hacking Device can be started, in which they need to steal the hacking technology from either the FIB Building in Pillbox Hill or the server farm at NOOSE Headquarters.

Most of these missions are listed at the bottom of the board. These are the same for every approach, and most are optional. These are:

For this approach, at least one type of the following disguises must be obtained, the others then being optional if the leader desires to have multiple choices when choosing an entry tactic.

If the heist leader triggered the cutscene introducing Yung Ancestor during the "Setup: Casino Scoping" mission, they have an additional option for an entry approach which can be chosen after two mission are completed for Yung:

The player also must complete the mandatory Heist Prep: Vault Drills mission, in which two vault drills must be stolen so the heist crew can access the vault during the heist.

The heist leader can also choose to obtain two exit disguises for use after robbing the Casino by completing the optional Heist Prep: Firefighter Gear and Heist Prep: NOOSE Gear missions.

If the player has collected all 54 collectible Playing Cards in Freeroam, the player can choose the "High Roller" exit disguise when starting the heist.

The final board allows the player to start the heist, which will bring up a lobby waiting screen. Once 2-4 players are present, the heist leader can press start, which will put them back on the third planning board.

Here, the leader can choose the entry and exit points, as well as entry and exit disguises if doing the appropriate approach. They also need to choose from three different buyers. Optionally, the leader can also purchase the "Clean Vehicle" and "Gunman Decoy" options. The former will place a clean vehicle on the map, which can be used by the crew if their starting vehicles are damaged during the getaway, and to help lose the cops. The latter option will make the gunman act as a decoy during the getaway, lowering the wanted level over time.

Similar to other heists in the game, the leader must distribute the money between all players. Every member of the team must get at least 15% of the final payout. 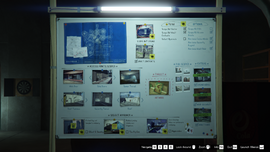 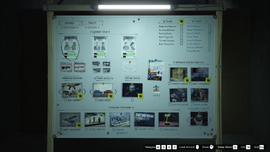 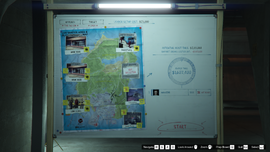