In-game time
“Ok. You go the transponder, you got the backup. Only question is: you ready to penetrate some crazyass nuclear bunker? We need them hard drives baby so get on it. And make sure the client comes back in one piece or your ass gonna hear it for real.”
— Contract description

The mission begins with the player being instructed to head over to Don Percival's bunker. After arriving at the bunker, the player will drive in using a transponder pulled from a Barrage during a previous planning work.

Once the player enters the bunker, the player will have to fight their way through multiple Merryweather operatives while simultaneously searching for the four hard drives plugged into mainframe computers around the bunker denoted by green dots on the radar. Once all the hard drivers have been obtained, the player will need to make their exit from the bunker back the way they came.

Upon exiting the bunker, the player will be directed to go to Elysian Island where Avi Schwartzman will need to upload the hard drives. While en route to Elysian Island, Merryweather will start to pursue the player in Mesas and Buzzard Attack Choppers. The player will need to be quick about getting to Avi's whereabouts before he is ambushed by Merryweather.

After arriving at Avi's whereabouts in Elysian Island, the player will be directed to head inside the portable building and Avi will direct the player to start inserting the hard drives into the terminal, after which the upload will start. A first aid kid, body armour, and ammunition will be left inside the building that the player can use at their disposal. The player from this point may choose to use the commandeered Merryweather armaments stored nearby. The player needs to defend Avi from the incoming waves of Merryweather guards that become more forceful as the mission progresses, as they will initially arrive on foot, in Mesas, then Buzzard Attack Choppers, Half-tracks, and Weaponized Tampas.

After eliminating all of the Merryweather guards, the player will need to go and speak with Avi. A cutscene will ensue where Avi hands the player an envelope, ending the mission.

Stealing a hard drive from the mainframe.

Close-up of a hard drive.

Inserting the hard drives into the terminal.

Avi handing the player an envelope. 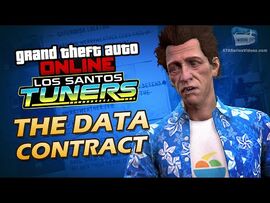