In-game time
The Chiliad Challenge is a side mission in Grand Theft Auto: San Andreas. The mission is started by entering a parked Mountain Bike on top of Mount Chiliad between 7:00 and 18:00 and having a cycling skill above 40%. The goal of the mission is to be the first to reach the base of the mountain while racing with other mountain bikers down the mountain. There are three courses that need to be completed for 100% completion. All three courses share the same finish zone and the final sector.

Whereas in any other vehicle race wherein one can shoot at other contestants and get away with it, in this muscle-based race, if the player attempts to shoot opponents, not only will the player fail the mission, a one wanted star will also be obtained. Typically though, trying the race again at the top of the mountain will help lose the cops. The player can, however, get off and use the sniper rifle (no other weapon can be used) to eliminate them without penalty. 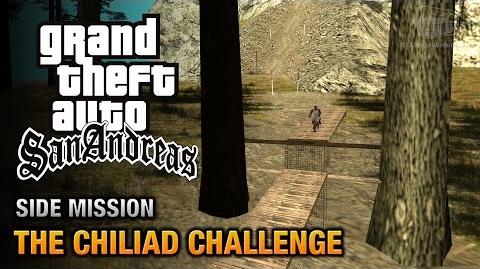 Retrieved from "https://gta.fandom.com/wiki/The_Chiliad_Challenge?oldid=1313582"
Community content is available under CC-BY-SA unless otherwise noted.