In the 3D Universe, their mascot is a character called Whoopee the Clown, sometimes referred to as Mr. Whoopee, which is also the name of the ice cream van used to distribute their products.

After the mission Shakedown, the player can purchase the factory and save the game there.

In 1986, Tommy Vercetti buys the factory and the Cherry Popper Ice Cream Company from former owner Maude Hanson. Tommy initially bought the factory believing it to be an actual ice cream factory, but upon finding out that the ice cream is a front and that the factory actually distributes drugs, Tommy starts using the company trucks to sell his coke shipments in the streets. After selling 50 units in a row, $3,000 can be picked up outside the factory.

It is unknown when the company was founded, as the factory is present in Grand Theft Auto: Vice City Stories (set two years earlier in 1984) but there is no indication as to whether it is owned by the company, as the ice cream scoops on the roof are absent.

In Grand Theft Auto: San Andreas, the company is also present. "Family size" tubs of Cherry Popper ice cream can be found in convenience stores all across San Andreas. The player can also see ice cream vendors selling ice cream on stands around the state, where some ice cream can be bought for $1 to replenish health.

The business is still running as of 2013 and has greatly expanded to locations in Liberty City and Los Santos.

The Cherry Popper Ice Cream logo appears on the side of Mr. Tasty ice cream trucks in Grand Theft Auto IV and tubs of Cherry Popper's ice cream can be seen in the fridge of the 69th Street Diner.

The hidden office in the back, entered with a trainer.

A cup with the logo of Cherry Popper on the desk in the flash version of the official Flash website of Grand Theft Auto: Vice City.

In Grand Theft Auto: San Andreas, The Cherry Popper "family size" ice cream tubs can be seen inside freezers at 24/7 and other convenience stores. Only two flavors can be identified:

Other flavors exist in ice cream vendor stands, and they can be seen on a small menu hanging on the stands' umbrellas ("Ices n' Prices"). However, the words are in very low resolution and are virtually unreadable.

24/7 and LTD Gasoline convenience stores contain The Cherry Popper freezers which contain ice pop packs of products that can be clearly identified.

There are numerous other products with other flavors; those can be seen in menu below, and are mostly results of partnerships with other candy companies. 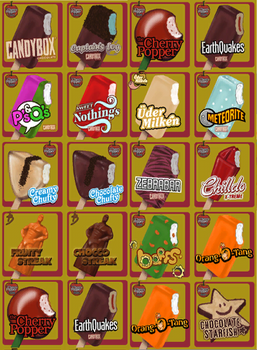 In the first PS2 version, the save point inside the garage of the Cherry Poppers Ice Cream Company is known to corrupt the player's save file if they save there. It is unknown what factor in the game causes this glitch and the glitch does not seem to happen all the time, but for safety purposes players should save the game elsewhere instead. This was fixed in later copies of the game. 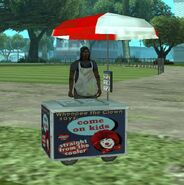 Inside of freezer's one section at LTD Gasoline in GTA V.

Inside of another section of freezer at LTD Gasoline in GTA V.