The Cayo Perico Heist Preparations are freemode missions that require players to complete a set of operations around Los Santos and San Andreas, in order to put into place the means to carry out The Cayo Perico Heist. All of these missions can be viewed and started from the prep screen on the bridge of the Kosatka, and become available after the player has completed the minimum requirements for scoping out the heist during the Intel mission. Missions must be initiated as a CEO or MC Club President, but are available in any lobby type (i.e. they are not restricted to public free roam sessions).

Although the player must complete a set of mandatory missions in order to activate the Finale setup screen, some are optional but can provide additional options for the player to have available when finalizing the setup for the heist, some of which are one-offs for each playthrough but confer advantages during the heist itself. An additional amount of prepwork becomes available when the Finale is active, which determines if the player will have a support crew on standby to assist during the heist.

All the missions can be completed in an invite-only session. When a prep mission is done in a public lobby and the player(s) has secured the main objective, once the global signal ends, other players will receive a text alert from 'their' Pavel.

“Surveillance suggests that someone is currently moving some equipment we could use in our operation. We could ask them nicely, or...”
— Pavel
“Good news. Another organization is relocating some of their equipment - we could use it for our work. Low-hanging fruit, yes?”
— Pavel
“I have reports of a rival organization transporting some equipment that would be useful to us. If you want it, it's there for the taking.”
— Pavel

The prep screen contains several preparation missions that can be conducted. Each falls into one of four categories: Approach Vehicle; Equipment; Weapon Loadout; and Disruption. All are mandatory for activating the Heist Finale, except for the Disruption missions which are optional.

Preparations must be repeated every time the heist is run. Pavel explains this is because they destroy all equipment so as to not leave any loose ends that El Rubio can track back to them.

“Ours is a strange business, kapitan. We work so hard to get new weapons, vehicles, equipment... and then afterwards, we destroy it all. The only way to be safe not sorry, yes? We leave behind a single piece of the jigsaw, Mr. Rubio will finish it.”
— One of Pavel's explanations for repeating the prep work every time

At least one of these missions must be completed to proceed to the Finale, leaving the rest to become optional for the player to undertake. However, opting for other approaches will require them to be done nonetheless:

Although five setups are available for the player to chose from for the finale, all follow the same prep mission structure:

Suppressors do not have a prep mission, but are optional addition for the heist nonetheless. The player can opt to use these in the Finale, but must purchase them first for an upfront cost of $5,000.

These missions are entirely optional, but serve to make the heist easier to complete by decreasing the effectiveness of the guards on the island. However, players have less than 10 minutes to complete each mission's objectives, and can only conduct the mission on each playthrough of the heist strand:

The finale screen becomes accessible when the minimum mandatory prep missions have been completed, and provides a list of the approach vehicles, infiltration points, compound entry points, escape points, time of day, and weapon loadout available to the player. In addition, it provides tips on how the time of day will affect the heist, and provides access to hiring Support Crew members. 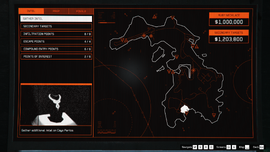 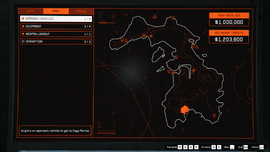 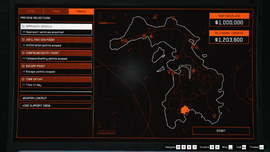 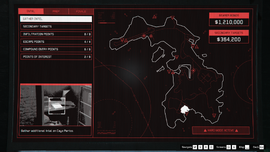 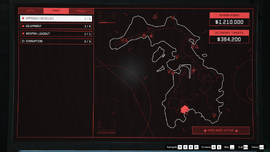 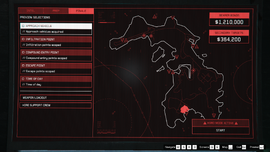