The Bus Assassination the fourth Assassination mission in Grand Theft Auto V given to protagonist Franklin Clinton by Lester Crest.

Lester tells Franklin that his next target is Isaac Penny, a venture capitalist whom Lester has discovered has threatened to outsource thousands of jobs once he gains a controlling share of Vapid Motor Company; Lester informs Franklin that Penny is cheap, regularly relying on Los Santos' bus system to get him to his dealings, and that he needs Franklin to kill him. Franklin gets a bus and starts stopping at bus stops picking up passengers. When he stops at the target's bus stop, the target senses something is wrong and makes a run for it. Franklin then chases and kills the target. A quick phone call to Lester ends the mission.

Players should be aware of the LSPD, since in this mission, police officers can be found walking the streets on foot and also can be found patrolling the streets in their police cars. If a cop car, cop, or pedestrian is hit, a wanted level star will be received, making the mission progress more challenging. An easy way to complete the level is to drive like a normal civilian and watch out for crossing pedestrians.

"A major automotive deal falls apart after a brutal murder. In the latest of a string of shocking terrorist hits on prominent businessmen in Los Santos, venture capitalist pioneer Isaac Penny has been murdered by an assassin masquerading as a bus driver. As a result, the leverage buyout deal of Vapid Motor Company has collapsed."

"In more news for big business, visionary venture capitalist Isaac Penny has been murdered just as he was about to save the US automobile industry by taking a controlling stake in Vapid Motor Company. How many more business leaders need to die before President Lawton stands up and calls these assassinations an act of terror?" 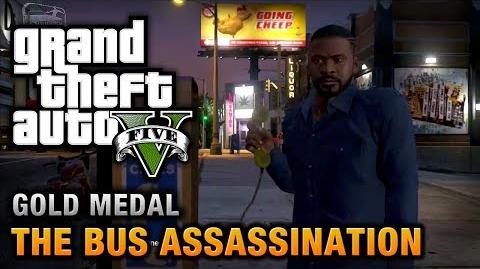 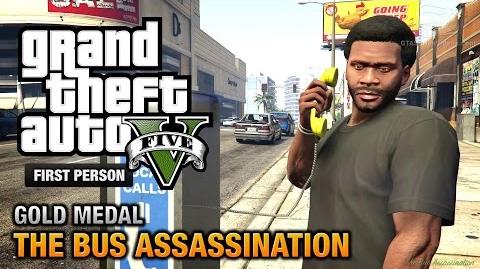 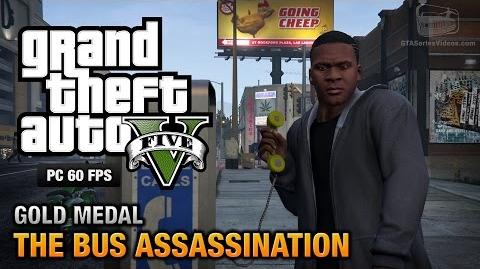