Vic: "Something's not right about this place..."
Lance: "Yeah! I didn't know bikers were into disco..."
Vic: "I think Forbes has fucked us again."
—Victor and Lance Vance discover Forbes' betrayal

Lance and Victor go to the house they've tied Bryan Forbes, looking for more information on a big shipment coming to Vice City. Forbes tells them that the contact who knows about the shipment is at the White Stallionz Bar. Victor and Lance drive over to the bar but while entering they're surrounded by White Stallionz gay white supremacist bikers who attack them. After all the Bikers are dead, the Vance brothers leave the bar to go and get Forbes. But upon arriving at the house, Forbes has freed himself and attempts to escape on a moped. They chase him and Victor kills Forbes as well as dropping Lance at his hotel.

Aunt Enid: Lance tells me he's running things down there. He's such a good kid...

There is no monetary reward for completing this mission, but the mission From Zero to Hero is unlocked, if the mission Snitch Hitch has also been completed. 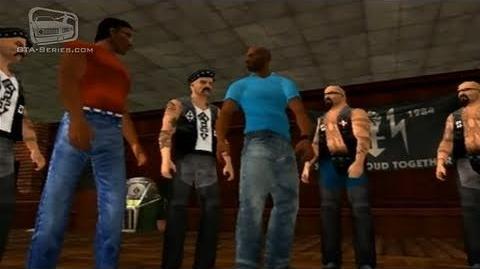