For other characters named "The Boss" in Grand Theft Auto Online, see The Boss.

The Boss of the Los Santos Triads is a minor character, appearing in Grand Theft Auto Online as a part of The Diamond Casino Heist update. He appears in Gerald's Last Play mission "Make Ends Meat".

In 2020, Gerald informs the GTA Online Protagonist that a long time rival of his runs a drug operation out of Raven Slaughterhouse, and he finally wants to get back at them. When the player arrives there, the Triad gang members present immediately attack the player, but are soon killed, forcing the boss to escape. The player follows and kills him, as he drives away in a cream-colored Sentinel Classic. 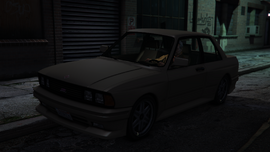