Herself
“Thanks for... picking me up? I'm excited to play you some records.”
— Marea to the online player.

During the events of GTA Online: After Hours (set in 2018), she performed as The Black Madonna. Stamper changed her stage name to the Blessed Madonna on July 20, 2020, in response to a Change.org petition that raised concerns of racial insensitivity.

After one week of Dixon's residency at the player's new club, The Black Madonna became available to book.

The player can book her for $100,000 from the Resident DJ section of the club management computer.

“You hear that? We can't have that. If we don't get there sharpish, she'll be playing live from Bollingbroke... not {nightclub}. Shit.”
— English Dave instructions to the player

English Dave explains that Marea is prone to "spontaneous acts of generosity" and is throwing a free rave in an underprivileged area and the LSPD have raided it. The player must travel from their nightclub to Puerto Del Sol helipad where Dave is waiting with a Jetsam Cargobob. The player flies to the location of the rave with Dave and finds Marea being loaded into the back of a squad car. The player airlifts the car containing the DJ and a single LSPD officer away from the scene and loses their 2 star wanted level and returns to the helipad. Upon landing, the LSPD officer attempts to arrest them but Marea knocks him out with a single punch and the trio return to the club.

Whenever The Black Madonna is resident in the club, she will have an entourage of three associates; producer/engineer Rupert Murray, agent Ryan Smith and manager Ryan Hambsch behind her in the DJ booth. 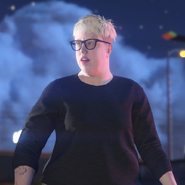 Her appearance in the trailer.

Marea being taken into custody by the LSPD.

Knocking out the LSPD.

In-game posters for The Black Madonna. 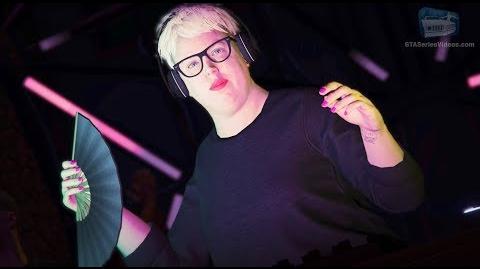