The Barfs is a Saturday morning cartoon in the Grand Theft Auto series appearing in the 3D Universe and HD Universe.

The show is a parody of The Smurfs and Snorks. Like its real-life counterpart, each character has a unique personality and appear on numerous amounts of branded merchandise, such as Little Lacy Surprise underwear. However, unlike the Smurfs, the Barfs explicitly hate sharing, likening sharing to communism. Each Barf has his or her own firearm for "protection and fun" and have an unique serial number on their foot. Their names seem to be a play on the adjectives that can be attributed to kinds of vomit.

In Grand Theft Auto: Vice City Stories, posters can be seen in Vice Point and inside Vice Point Mall.

It is screened on VBC.

A "new" episode is also advertised on Radio Espantoso. The ad starts with an announcer saying the show's broadcast time (Saturday morning at 9), claiming that The Barfs are "under attack from a familiar evil menace", but then, dialogue from the episode plays and this "menace" is revealed as an unnamed character (described as a "tiny purple person") simply seeking help.

The tiny purple person screams and calls him a "major dick". The episode then is cut with the "moral of the story", where another Barf says "Today, we learned today that purple is a lot like red. Never judge a book by its cover, instead, shoot on sight!"

The announcer then repeats the show's broadcast time and the ad ends with the Barfs cheering.

In Grand Theft Auto V, during the mission Friend Request, four of the six The Barfs toys can be seen in their packaging on the wall in Lester's House and there is an opened figure of Smokey Barf on the shelf with his EXsorbeo game collection.

Lester Crest also has a The Barfs comic book #12 dated May 2012 published by Number 2 Comics featuring Smokey Barf in Blood Bathtime - I'd Lather Be Dead. in his house. It also appears in the window of the Hardcore Comic Store. "New Barfs" are shown on the cover of Animen Only magazine. Tiny Barf is seen on the cover of more on TV magazine, stating they are coming to MeTV.

The Barfs have a star on the Vinewood Walk of Fame.

In Grand Theft Auto Online, players were able to buy a Barfs T-shirt as part of the Independence Day Special.

Smokey Barf appears in the animated advertisement for the Ring of Fire: Hot Sauce in the Arena War update for GTA Online.

We hate anything foreign

We live in a tree, seperately

We each have a gun

Firearms is for protection and fun

Most of all, Barfs ain't cherry

We keep a natural anthem prairie

Fruity Barf, how do you do?

Now you know our barfy song

Grab a gun and sing along

Cause before we're through

You'll be barfing too! (Bleugh!)

Announcer: Every Barf is unique, just like you and me! That's right, even though some Barfs look alike, every Barf has a unique serial number hidden on his foot, so no two Barfs are the same.

Kid: I love my Barf! He's unique, and he's never red, even though he lives in a tree. Mom, I want more Barfs!

Announcer: Now it's easy to get more Barfs! Just stop at any Pizza Stack location, buy two large pizzas, a pitcher of Sprunk, and a Barfs drinking glass of the day is yours for only $15!

Announcer: Don't miss a new episode of The Barfs, this Saturday morning at 9, when the Barfs come under attack from a familiar evil menace...

Big Major Barf: This sounds like a lack of personal accountancy and a slow, but steady decline towards a welfare state. That's un-American!

Purple Person: But, us bouncy purple people have always helped the Barfs, and shared our knowledge, and love!

Big Major Barf: Barfs are individuals! We have a unique serial number on our foot. We're self-sufficient and proud of it! You deserve to starve!

Big Major Barf: Hindsight is easy, but as my mom, Harlet Barf, told me, a wise Barf arms himself to the teeth, because of tomorrow, not yesterday.

Purple Person: (screams) You shot me! You're a major dick, Big Major Barf!

Lady Barf: We learned today that purple is a lot like red. Never judge a book by its cover, instead, shoot on sight!

Announcer: The Barfs, Saturday mornings at 9.

Chunky Barf - a Barf wearing a do-rag and gold chain, carries a Micro-SMG.
Add a photo to this gallery 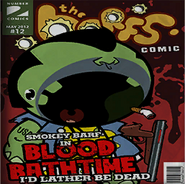 Texture file of the comic book.

Smokey Barf on a shelf.