In-game time
“You got the explosives and the signal jammers. Sounds like we ready to rob a motherfuckin bank. Time for some old school cash grabbin, yall. Six banks. Six racks of crisp marked bills. Get em back to me and K, and we'll make sure you get some real ones.”

An Armenian client wants the player to rob six Fleeca franchises located throughout Los Santos and Blaine County storing marked bills. The mission begins with Sessanta sending the player the location of all 6 Fleecas. The player can hit them in any order they choose, however, in order to maximize efficiency, it is generally recommended to hit the banks in this order:

If all signal jammers were planted during Planning Work: Signal Jammers, the player will have two minutes to rob as many franchises as they can before they receive a wanted level. The process of robbing a Fleeca branch is rather straightforward, the player is directed to walk into the bank, go into the vault, place the thermal charges on the vault door, and steal the marked bills.

As the player progresses from bank to bank, they will eventually gain a three-star wanted level and the LSPD and the LSSD will start to pursue the player and surround Fleeca branches each time the player goes into a new branch. The player can repeat the process they were doing before, however, each time they exit the bank, they will have to take out the police surrounding the bank before advancing onto the next Fleeca branch.

Holding up the Legion Square branch.

Stealing the cash from the vault.

Engaging with the LSPD at the Burton branch.

Holding up the Morningwood branch.

Fleeing from the Morningwood branch.

Meeting with the Armenian client. 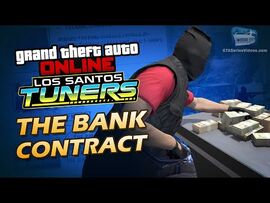