Lance Vance, in his hotel room, talking to Victor Vance

In-game time
“Listen, I met a big player! We'll get big money for doing practically nothing!”

The Audition is the first mission in Grand Theft Auto: Vice City Stories given to protagonist Victor Vance by his brother Lance Vance from his hotel room in Downtown, Vice City.

Victor visits Lance at his hotel suite. Lance is on the phone at the time and claims he has found a new "player" by the name of Bryan Forbes, who has inside information on incoming drug shipments to the city. Later that night, at midnight, the duo drive to the King Knuts burger bar Downtown where Lance calls Forbes again. Lance informs Vic that Forbes has hidden some drugs in his car which is currently in the impound yard. At that moment, a group of armed robbers enter the restaurant and hold the diners hostage.

Vic and Lance escape from the restaurant but find themselves surrounded by the police. Mistakenly believing the Vance brothers were responsible, the police pursue them. The brothers drive to the Vice City Port Authority building in Viceport, where they steal a motorbike, drive onto the roof and use a ramp to jump onto the building over the impound. After locating Forbes' car, Vic and Lance drive it over a ramp out of the impound. Once clear of the impound, Lance drives off to meet Forbes.

Lance: I've dropped off the car Bro'. See you at Forbes place...

The reward for completing the mission is $750 and the mission Money for Nothing is unlocked, along with the first Civil Asset Forfeiture Impound side mission. 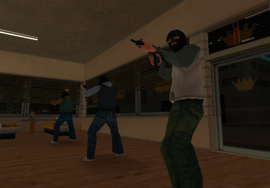 Three gangsters robbing the King Knuts during the mission.