Franklin Clinton describes him as an arms dealer who he knows personally.

He always wears a dark shirt and black suit jacket, with a black cowboy hat to match.

He usually flies in a white Shamal.

“Alright, look, homie, who'd'a thought an upstanding arms dealer would need his ass rescued? But that's just the kinda world we live in. And I know this dude personally... but I just got the call, man, that his plane was shot down somewhere over the desert, and him and his bodyguards are pinned down by the assholes who did the shootin'. We want his money, we better get up there fuckin' fast.”
— Franklin's description

The arms dealer is ambushed by The Professionals while flying over the Grand Senora Desert in his Shamal. He is shot down and attacked in Senora National Park.

F. Clinton and Partner is contacted, so Franklin sends the player to save him and take him back to the safehouse. 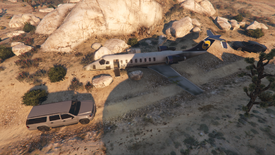 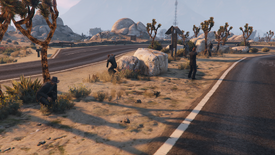 Under attack on Nowhere Road.