In-game time
“Security pass ready, schematics good to go. Guess it's time to bust into the IAA, find that dealer, and politely ask his ass to give up where this hotshit formulas' at. Gonna be high heat for some piece of paper, but one piece of paper for our client means a whole lotta paper for us, feel me?”

The Agency Deal finale is a Contract introduced to Grand Theft Auto Online in the Los Santos Tuners update. It is the final mission of The Agency Deal strand.

The player will be instructed to head over to the tunnel entrance to access the Pillbox North Station where the security door to the IAA Facility is located. Upon arrival at the security door, all the player needs to do is swipe the keycard in order to gain clearance into the facility.

After facility grounds have been cleared of agents, several more agents will appear on the second floor. The player will have to take them out before being able to reach the dealer. A cutscene plays where the player enters the interview room where the dealer is held before making a phone call to KDJ and putting him on speakerphone. The dealer will be struck by the player under orders of KDJ, after which the dealer will be coerced into writing down the location of the recipe before handing it over to the player, after which the player leaves.

Once the cutscene has finished, two agents will come out of the stairwell with additional agents waiting for the player downstairs. Just like before, the player will need to use caution when dealing with the agents. Once the agents have been taken out, the player can exit the facility.

Inserting the security pass into the keypad.

The player & KDJ interrogating the dealer.

The dealer writing down the location of the crystal vape recipe.

The player fighting their way out of the facility.

Fleeing from the IAA facility.

NOOSE waiting for the player at the tunnel exit.

Digging up the utility box.

Delivering the recipe to Miguel Madrazo. 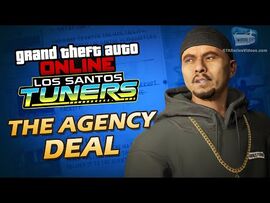