• ­Head to the rendezvous.

• ­Choose to kill Darko or let him live.

"That Special Someone" Achievement

That Special Someone is a mission in Grand Theft Auto IV. It is given to protagonist Niko Bellic by the United Liberty Paper agent, telling Niko that he has returned the favor for him after doing his jobs by giving him what Niko wanted.

Niko receives a phone call from the United Liberty Paper contact informing him that they have located Darko Brevic (the third surviving member of Niko's army unit during the Yugoslav War who betrayed the unit) and are bringing him to Liberty City. The contact informs Niko that Brevic will be held at the cargo bay of Francis International Airport. Niko phones Roman to tell him the news, and Roman asks to come along with Niko. Niko collects Roman from Firefly Island and the pair drive to the airport. During the journey, Niko looks back to the day of Brevic's betrayal and asks Roman what he is good at, with Roman replying that Niko still has integrity and the "power to be good," but that he must learn to forgive once the confrontation with Brevic is over.

Niko and Roman arrive at the airport's cargo bay. At the same time, a van containing some ULP agents pulls up. One of the agents throws Brevic out of the back of the van and drives off. Niko angrily confronts Brevic, who is handcuffed and asks why he betrayed the unit. Brevic claims that Goran (one of the members who was killed) killed Brevic's neighbours, and that he betrayed the unit for $1,000 to fund his drug addiction. At this point, a visibly emotional Niko expresses his horror at the fact that the unit was betrayed for such a paltry sum, but Brevic calls Niko a "hypocrite" and asks how much he charges to kill someone. Brevic challenges Niko to kill him, claiming Niko would be "doing him a favor." Roman tells Niko they should leave, claiming Brevic is already suffering from the effects of his actions and "doesn't look like he enjoys life too much."

If the player chooses to kill Brevic, Niko will shoot him twelve times - once for each member of the unit who was killed. A dying Brevic "thanks" Niko for killing him. After Brevic dies, Roman suggests they leave before they are spotted and asks Niko to take him to Brucie Kibbutz's house. As Niko and Roman get back in the car, Niko switches the radio off, claiming he doesn't want to listen to the "annoying ads and DJs." On the way to Brucie's house, Roman asks Niko how he feels, with Niko claiming he feels "empty" as he realizes that killing Brevic has not changed anything. When they arrive at Brucie's house, Roman asks Niko if he wants to come inside, but Niko declines, claiming he needs to be alone, before thanking Roman for accompanying him. Roman heads inside, and Niko phones Bernie Crane to inform him that Brevic is dead and has "paid for his crimes." Bernie tells Niko that it is "good to know" before telling him to leave the past behind and focus on his new life in America. Niko claims the past is usually all he has, before telling Bernie to look after himself.

If the player chooses to spare Brevic, Niko walks away from him and back towards his car. Brevic runs off, and Roman asks Niko to take him to Brucie's house. When they get back in the car, Niko switches the radio off, claiming he doesn't want to listen to the "annoying ads and DJs." During the journey, Roman tells Niko that he did the right thing by sparing Brevic. Niko is initially skeptical of his decision, but later agrees that he did the right thing after realising that killing Brevic would not change the situation or bring Niko the closure he desired. When they arrive at Brucie's house, Roman asks Niko if he wants to come inside, but Niko declines, claiming he needs to be alone, before thanking Roman for being with him. Roman heads inside, and Niko phones Bernie Crane to inform him that he confronted Brevic, but that he felt sparing Brevic was the best thing to do. Bernie congratulates Niko for his choice, claiming he is proud of Niko for walking away, and that both men now have the closure they desire. Bernie suggests they celebrate with a spa day, before Niko tells Bernie that he will speak to him soon. 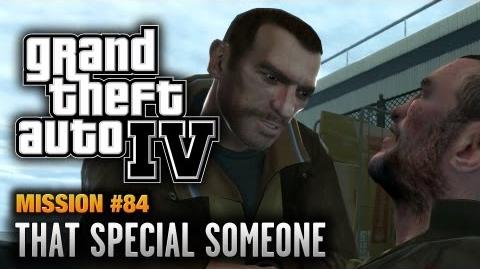 Retrieved from "https://gta.fandom.com/wiki/That_Special_Someone?oldid=1306797"
Community content is available under CC-BY-SA unless otherwise noted.