Standard White - 100%
“Ladies and gentlemen, we have crossed the frontier. The motorcar has evolved. The first member of a new and alien species has arrived, and it does not come in peace. The Tezeract's only purpose is to wage a silent war of annihilation on anything else that dares to call itself a means of transport. As of now, there's a right side of history. Choose wisely.”

The Pegassi Tezeract is an electric hypercar featured in Grand Theft Auto Online as part of the Southern San Andreas Super Sport Series update, released on March 27th, 2018, during the Ellie and Tezeract Week event.[1]

The Tezeract is strongly based on the Lamborghini Terzo Millennio, with some styling cues from the SRT Tomahawk. The rear design is similar to that of the Lamborghini Aventador SV, with the lights, rear vents, and bumper. One spoiler option, the Split Aero Spoiler, takes inspiration from the winglets on either side of the Ferrari FXX-K.

The Tezeract is distinguished by its sleek design and rather unusual features, where the front end features a trapezium-shaped intake on the centre, followed by two vertical intakes on the outer edges. Its headlights are housed into horizontal fins that jut out of the bulky fenders. Through the front windscreen, three adjustable shock absorbers and springs for the frontal suspension can be seen, similar to the X80 Proto. A Pegassi emblem can be seen on the front.

The sides feature sectioned skirts and a dual set of carbon-fibre fins near the rear vents, along with small diagonal vents just between the cabin and the rear wheels. On the greenhouse area, the car has triangular front-quarter windows and carbon-fibre plates on the rear quarters, as well as gull-wing doors with carbon-fibre separations between the front-quarter windows and the door windows. The roof features an inset section passing through the whole panel, between the gull-wing doors. The area behind the cabin is mostly covered by a carbon-fibre plate, with glass panes exposing the engine bay, the Pegassi badges and a rounded end that extends a bit further from the rear overhang.

The rear end of the car features a set of tail lights somewhat similar to the headlights, followed by carbon-fibre frames separating the rear meshed vents and the license plate on the centre, placed over the central exit vent. The lower area is occupied by dual diffusers, each one having four blades, with the innermost ones angled towards the centre. The underside of the car is fully carbon-plated.

The car has a racing interior shared with the X80 Proto and Visione. In replacement of the revolutions on the tachometer, this vehicle instead features an kW dial, reused from the Raiden. A Pegassi emblem can be seen on the centre.

The primary colour of the car is applied on the bodywork and the shock springs found under the windscreen, while the secondary colour is applied on the details on the rear-quarter sections of the cabin, the details of the engine bay/battery cells in the rear section, the upper part of the rear diffuser, the inner part of the stock rims, and the interior stitching. A trim colour is also available for the interior dashboard, door panels, and seats. The rims consist of 10 dual spokes overlapping with each other around the centre, creating smaller triangular patterns. These rims are placed over a glowing, turbine-like detail on the outer surrounding, which has multiple black lines. The rims themselves can also support a dedicated colour, although only naturally-generated examples from Content Creator may have one.

The stock rims appear to glow in the dark, along with an optional modification for the shock springs. The glowing effect depends of the secondary colour's brightness, meaning the effect is more intense with brighter colours, such as Lime Green or Ultra Blue.

The Tezeract is different from recent electric vehicles in that its initial acceleration is slower similar to the internal combustion vehicles and it slowly speeds up over time; where it ends up is an impressive top speed that rivals the top supercars and is noticeably higher than the other electric vehicles. It is also surprisingly good at ramming other vehicles, despite the lightweight design and lack of torque.

The Tezeract is also the first electric vehicle to have a different engine sound, having a much lower-pitched pulse in comparison to the other electric cars in the game. Despite being an electric vehicle, the Tezeract is considered to contain fuel in the handling files[2], however the vehicle's only appearance being in GTA Online means that the vehicle cannot run out of fuel, however it technically can in GTA V.

One of the reasons this vehicle has such an incredibly high top speed is due to it featuring a very high DownforceModifier value of 170.0[3], giving the vehicle extra downforce. While this isn't as high as the Tyrants or Entity XXRs, what allows this vehicle to reach a higher top speed than these vehicles is its very low DragCoeff value of just 2.0[4], comparatively lower than the Entity XXR's DragCoeff value of 8.3000, meaning the vehicle produces much less drag aided by its sleek, light-weight, aerodynamic and low-profile design. The Tezeract is one of 10 vehicles added in the Southern San Andreas Super Sport Series update to include an EngineResistance handling data subset, with an engine resistance value of 0.02[5]. This appears to make little to no statistical or visual difference to its performance, however. [6]

The Tezeract's statistical stock top speed is 126 mph / 202.8 km/h.[7] Like several other electric vehicles, EMS upgrades in Los Santos Customs have no influence on the vehicle's top speed, remaining the same at all 4 levels of EMS engine upgrades. This top speed is the highest top speed any vehicle has, being higher than a fully modified Banshee 900R or unmodified Pariah, and higher than any other supercar in the game, however the vehicle's initial acceleration to reach this speed makes it difficult to reach this speed in a short space of time.[8]

Official screenshot of the Tezeract.

The Tezeract's wheels glowing at night. 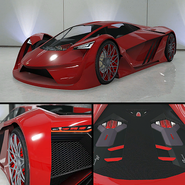 The Tezeract on Legendary Motorsport.

The Tezeract on the updated Rockstar Games Social Club

The Tezeract in the Cinematic preview on Rockstar Games Social Club. 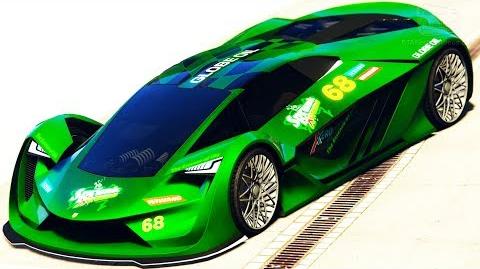