Textile City is a small commerce neighborhood in Grand Theft Auto V and Grand Theft Auto Online located in Downtown Los Santos. It borders Alta to the north, Mission Row to the south, Pillbox Hill to the west and La Mesa to the east.

This neighborhood is known for its factory outlets, wholesale stores and retail shops. There are many clothing stores lined up along the streets of Textile City. It was formerly an industrial area, as indicated by the reused factories that turn into makeshift stories. Just like neighboring East Los Santos, the effects of gentrification and tourism caused a new buildup of commerce and business in the neighborhood. A decommissioned railroad is nearby, along with a few warehouses that are still serving their original purposes.

Many shoppers can be seen frequenting here during daytime. The famous Simmet Alley is a crowded, bustling marketplace full of buyers and sellers. Most of the stores in Textile City are either clothing and fabric stores or restaurants. It is also home to two theatres, Foxy's Theater, and the Ten Cent Theater, the latter of which is a purchasable property in story mode.

Textile City is bordered by Downtown Los Santos in the north, La Mesa in the east, Pillbox Hill in the west, and Mission Row in the south. It is one of the smallest districts in San Andreas, true to the real life Fashion District of Los Angeles, and covers just two blocks laterally and longitudinally. San Andreas Avenue denotes the border between Textile City and Mission Row.

It is based on the Fashion District in Los Angeles, California, also home to many fabric and clothing stores, hence the shared names.

While Franklin Clinton and Chop are chasing D, they all run through Textile City, dodging many people and cars. They then make their way into Mirror Park Rail Yard.

In 2021, during the events of The Contract update, Imani narrows down the location of the person who stole Dr. Dre's phone to Textile City, but she cannot pin down their exact location. The GTA Online Protagonist goes to the location and searches for the target. He is eventually found hiding out at the Mirror Park Railyard nearby.

Textile City accommodates the Dashound Bus Center, situated east of the Mirror Park Railyard and across the road west from Pillbox Hill Medical Center. The center provides transport around the city and usually has Buses parked at the station. Despite this, Buses are never seen entering or leaving the station in regular gameplay. A single bus stop can be seen on Strawberry Avenue, from which a Bus can occasionally be seen pulling away from during the day. 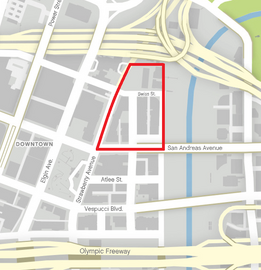 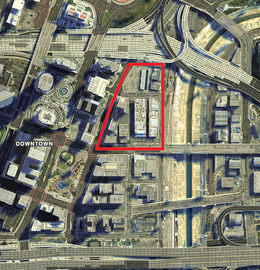