GTA Wiki
Register
Don't have an account?
Sign In
Advertisement
in: LCPDDB, Characters, Characters in GTA IV,
and 9 more
English

Terrence "Terry" Thorpe is main character and a friend in The Lost and Damned and a minor character in Grand Theft Auto V.

Terry is a member of The Lost MC and the LCPD believed that he may have ran one of their methamphetamine labs. He was the Lost's Arms Dealer. He and Clay Simons were friends of Johnny Klebitz and helped him out on some missions when Johnny called for them. He also provided weapons for the attack on the jail and helped Johnny to get to Billy Grey there.

In The Lost and Damned, the player can call Terry to deliver weapons to his current location or close by. Unlike Little Jacob, Terry carries RPGs and other powerful weapons.

Terrence Thorpe was born in 1977 in Acter, Alderney. He has a brother, "Crazy" Colin, who was disowned by his father and later became a born-again Christian before developing a heroin addiction. Terry himself began smoking as a teenager, and also began to use drugs. Terry often mentions his past as a soldier in military forces. At some point, Terry became affiliated with Johnny Klebitz, Billy Grey, Angus Martin and Jason Michaels, all members of the Alderney chapter of The Lost MC motorcycle club, eventually becoming a member himself.

During this time, Terry married an un-named woman, though they later divorced.

Terry possibly became a member of The Lost MC in 1997, when he was arrested for Grand Theft Auto. He was arrested again in 1999 for Manslaughter, and again in 2005 for Possession of a Controlled Substance (Methamphetamine), making the police believe that Terry was running a methamphetamine lab.

During the time in The Lost, Terry became the Arms Dealer and a patched member of The Lost. Terry became a close friend of Clay Simons and the two started to hang out with Johnny. Terry was also a friend of Jim Fitzgerald and Brian Jeremy. When he is at the Lost MC Cubhouse, Terry occasionally works as a bartender.

Terry is frequently seen with Clay Simons, suggesting that they have close friendship.

Terry helps Johnny Klebitz and The Lost MC during most the game, like taking back Billy's Revenant and attacking The Angels of Death at their Clubhouse. When Johnny and Jim stole some AOD bikes, they called Clay and Terry in order to help them against some AOD bikers. After Billy was arrested, Terry remained loyal to Johnny and helped him by killing Brian Jeremy's Chapter. After Brian's death, Clay and Terry played a small role during the game and can be called for backup in several missions.

When Ray sent hitmen to kill Johnny and Jim, Clay and Terry planned an ambush along with Johnny to kill the hitmen. The player can simply fight the hitmen on his own if he doesn't call Terry/Clay as well. When Billy wanted to talk with the feds, Stubbs connected with Clay and Terry, who got firepower to break into the jail, Clay helped Johnny, who killed Billy.

When they returned to the Lost MC Clubhouse, they found that it had been trashed by the Pegorino crime family. Johnny, Terry, Clay, and Angus Martin, the remaining members of the Alderney chapter, briefly reminisce about the club's glory days, before "putting the clubhouse out of its misery" by burning it down.

By 2013, The Lost moved to Blaine County, where they became associated with Trevor Philips. After killing Johnny in a moment of rage, Trevor meets up with Terry and Clay to mock them. The duo, along with a van, attempt to escape in order to inform the gang of the news. Terry and Clay can be ultimately killed by Trevor; if the player doesn't kill them until the trailer park massacre, they can flee but it is unknown what becomes of them after. However, in GTA Online: Bikers, Terry's death was confirmed to be canon.

NOTES
- Member of the Alderney Chapter of the Lost OMG.
- Believed to be running a methamphetamine lab.

Terry has a deep-seated hatred for the federal government, and seems to believe it exists exclusively to curtail various freedoms and rights, and often shows blatant disregard for the law, including smoking in "restricted" areas. He firmly believes that federal agents are closely monitoring both him personally and The Lost MC as a whole. He subscribes to multiple conspiracy theories, particularly ones that demonize the government. Despite his distrust of federal and all other authority, he is every bit as patriotic as any other Lost brother.

Terry's jacket, like any outlaw motorcycle club member's, has a lot of patches in it. Here they are, and what they mean:

Terry with Johnny in a very early screenshot.

Terry with Billy and Johnny in an early screenshot.

Terry in Get Lost. 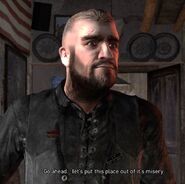 Terry in the vandalised clubhouse.

Terry with Clay in Mr. Philips.