"If malware had six wheels, heavy armor and comfy seats, this is what it would look like. It can launch source and resupply missions for every business you own, mine the data of every other reprobate in the city, launch exclusive Client Jobs, and that’s before you get to the upgrades: a Multi-Lock Missile Battery, a drone station, a Mk II weapon workshop, and the only vehicle workshop in the world capable of customizing the Oppressor Mk II."
―Rockstar Newswire description.

The Benefactor Terrorbyte is an expedition truck featured in Grand Theft Auto Online as part of the After Hours update, released on August 14th, 2018, during the The Black Madonna Residency Week event.

"The Terrorbyte is a fully rigged command unit, custom built by Lester’s trusted hacker contact Paige, and can handle the operations for your vast criminal network from anywhere in the state."
―Rockstar Newswire description, prior to its debut.

The Terrorbyte is a large command truck based on the Mercedes-Benz Zetros 6x6 Expedition Vehicle, except that the turning lights were replaced by the main headlights and moved to the bumper, where the secondary lights are.

The Terrorbyte is similar to the Brickade featured in the Further Adventures in Finance and Felony update, having a large module in the back and an access door in the passenger side. However, the box is fully enclosed and carries two spare tires in the rear end, as well as two camera devices in the roof and the rear end, between the spare tires. A large missile battery is fitted in the back, which is seemingly hidden within the rear module (unless the corresponding station is purchased and a gunner operates it). The missile battery bears strong resemblance to the M270 Multiple Launch Rocket System, also having 12 tubes in two six-pack launch pod containers.

The rear module has an interior that is composed of a medium-sized command station, fitted with a touch screen, various electronic devices and other assets the player can purchase. There is a door at the front that leads to the cabin and there are side doors near the front and rear to exit from the truck. If a vehicle workshop is installed, a small platform allows storage of the Oppressor Mk II. Another compartment door in the rear module would theoretically allow access and exit for the aforementioned vehicle, as well as a circular hatch on the roof apparently intended for the drones. Like the Mobile Operations Center and the Avenger, a blue corona may appear in front of the module's door when stationary, and one can exit the vehicle or go into the cabin. The corona would move to the rear door if the aforementioned Oppressor Mk II is driven there.

Paige Harris claims she built and designed the interior of the Terrorbyte herself, although it is unknown what the vehicle was used for before Paige converted it into a mobile nerve center. When the player enters the rear module for the first time, a brief cutscene plays and Paige talks through some sort of communicator, briefing the player the functionality of the truck, as well as any purchased asset and interactive features.

The Terrorbyte has similar performance to that of the Brickade, having decent speed and handling, but lower acceleration. The suspension provides good capabilities to sort small obstacles and uneven terrain, but is not the best off-road due to the rear-wheel drive layout and its weight. Its high exhaust stack gives it the ability to drive through deep water without the risk of engine damage.

The truck is equipped with a player scanner that is able to read players' general statistics, along with number of private dances and sex acts purchased. The scanners are actually the cameras on the roof and the rear of the vehicle. These cameras are mainly used by the driver, although the front passenger can make use of these too. Both cameras have a motion range of 180 degrees relative to the front or rear end.

The Terrorbyte is very resistant against bullets and explosives in general, as it takes up to thirty-four rockets without exploding (with a thirty-fifth one to finally destroy it). Like most armored vehicles, the Terrorbyte comes with bullet-resistant windows, providing small protection against firearms, but one should be still careful, as armor-piercing rounds can pass through these easily and the windshield is pretty large, leaving the front occupants vulnerable.

The Terrorbyte comes equipped with a missile battery that can lock on five different targets at once, able to attack simultaneously on an order specified by the locking-on sequence. The missiles are not very maneuverable and can miss targets that are moving away from where the launcher is aiming. Also, like the Chernobog, it has very limited capacity against land vehicles that are too close to the truck, despite capable of locking on targets from close ranges. Something unique compared to other launchers is that it can also lock on players on foot, being a dangerous threat on mid to long ranges.

The weapon takes five seconds to reload, regardless of how many missiles it fired. However, firing an unguided rocket reduces this reload time to just 1.5 seconds.

Care should be taken with the truck while the gunner is operating the launcher; if the truck is flipped to a side, the weapon is rendered unusable and the gunner must wait for the vehicle to turn back onto its normal position to access the remote camera view again.

"Hey, it's Paige Harris. I work with Lester Crest... I basically run things over there while he takes credit. Anyway, I've got a new sideline you might be interested in... high-end scores, taken elegantly, using the latest tech. Only problem, you'd need somewhere to store our Nerve Center... if you ever start a club with Tony Prince, I'll give you another call."
— Paige

The Terrorbyte is added to the player's Interaction Menu and is able to be called to near* wherever the player is located and dispatched back to nightclub storage on demand. The player cannot immediately relocate an existing Terrorbyte using the menu, they must return it to the nightclub and then re-call it to their current location.

The Terrorbyte serves primarily as an operation hub for all 8 business types; Vehicle Cargo, Special Cargo, M/C Club Businesses (Weed, Cocaine, Meth, Counterfeit Cash), Supplies and Air Freight Cargo, alongside Paige's Client Jobs. They can be accessed and triggered on the touchscreen tablet within the truck module, which is required to be utilised under a SecuroServ VIP contract, SecuroServ Organization or a registered Motorcycle Club.

If the Turret Station upgrade is installed, a Turret station provides access to the multi-lock missile battery, which offers defensive capabilities and can lock on five different targets at once.

The optional Drone station provides access for a surveillance drone in an area within the truck and will be deactivated when it is out of the signal radius and have a one-minute cooldown until another one can be deployed again.

The optional Weapon Workshop gives the same functionality as the ones from the Mobile Operations Center and the Avenger.

A wardrobe can be seen next to the touchscreen and used in the same manner as any property-owned wardrobe.

The Terrorbyte's minimum base cost is $1,375,000 and for every non-default aspect, its price will be increased.

The player can modify the vehicle options at any time by revisiting Warstock Cache & Carry and re-specifying the customization options, but will not receive any credit for previously paid for options. Other exterior modifications can be performed at the Nightclub's garage.

The Terrorbyte can only be modified inside a Nightclub garage.

When purchased, the Terrorbyte comes painted in the following colors by default: 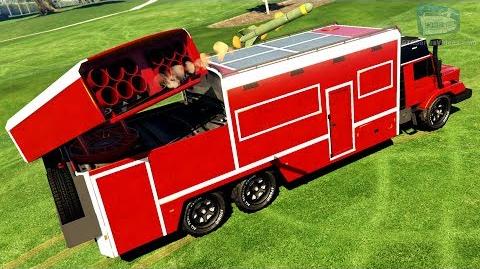 Vehicles with similar features and functionality:

Retrieved from "https://gta.fandom.com/wiki/Terrorbyte?oldid=1263307"
Community content is available under CC-BY-SA unless otherwise noted.