Terroil is apparently a company specialized in the refinement and commercial sale of fuel, but appears to have a limited presence in Liberty City, operating only one filling station at Albany Avenue in Lancaster, Algonquin, as well as a refinery at the Acter Industrial Park; Terroil storage tanks can be found most in the Acter Industrial Park. Like with other gas stations in GTA Chinatown Wars, Terroil's sole gas station can be used to produce Molotov cocktails.

Terroil fuel tanks feature the slogan "Waging war on prices", a possible reference to oil wars fought in locations with vast oil reserves, particularly in Middle Eastern locations such as Iraq and the Persian Gulf.

Terroil's oil is suggested to be pumped from foreign reserves while sold in America, with benefit to the US economy.

Terroil's influence is very vague, even more so than RON. Its logo and colour scheme of green, brown and blacks is unlike most petroleum companies operating in America.

Their Vintage logo in Grand Theft Auto V appears to be based on the logo of Phillips 66; based on it shield shape which itself is inspired by the Route 66 shield.

The only Terroil filling station in Lancaster appears to be based on the real life Shell station in northen Yorkville on East 96th Street and First Avenue in Manhattan. The Terroil refinery in Acter Industrial Park is likely based on the Phillips 66 refinery in the Bayway Refinery in Linden, New Jersey.

Terroil could possibly also be based on BP; since it has a somewhat similar colour scheme and the fact BP's old logo has a shield shape.

Terroil's name could be a play on the word "Turmoil", or "Terror". 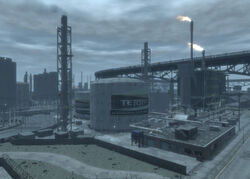 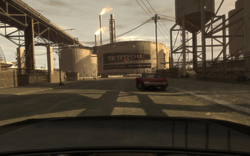 Another view of the Terroil refinery in Acter Industrial Park.

A Terroil billboard in Grapeseed. 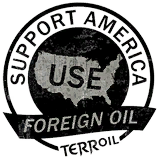 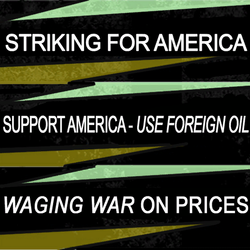 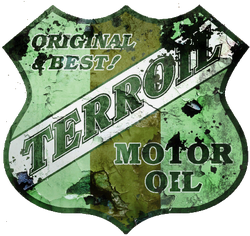 A Jugular with a Terroil Two-Tone livery.