The Territory Glitch is a glitch in Grand Theft Auto: San Andreas that affects the Gang Warfare gameplay feature.

Every area in San Andreas named on the map is a territory, including the state.[1] The glitch involves activating territories that have been dummied out (by setting all gang ownership values in the territory to zero), and forcing them to be active again by making a gang own that territory.

Type 1 involves traveling out towards the sea in any direction for approximately 30 minutes. You must not stop your vehicle, turn back, or pause the game.

This version of the glitch is caused by arrays related to maps, but not related to determining which parts of the map have been revealed or "un-fogged" (marked with a normal color instead of grayed out and having markers shown in it on the main menu map), being unintentionally modified by the game when attempting to reveal parts of the map while outside of the main San Andreas area as the player moves to these areas. [2] [3]

Depending on which part of memory the game corrupts attempting to reveal newly accessed parts of the map, various parts of the game may be affected, most obviously the gang territories, but will also affect other elements depending on the game version. [4]

Several of the following glitches can occur due to the array corruption:

If the turf comes up, it will hopefully be covered in gangs. Strangely, Red turfs flash in Las Venturas on occasion, suggesting a deleted gang, possibly the Mafia.

This glitch will occur during normal completion of the game, as some required missions require the player to access areas outside of the normal San Andreas zone, such as Saint Mark's Bistro and Freefall.

Territories in San Fierro, gotten by the PS2 codes. Red turfs belong to the Triads, blue to the Rifa and Orange to the Da Nang Boys. 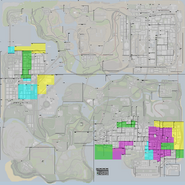 This map contain the name of all territories in the game except for the territory SAN_AND, which is the whole map.